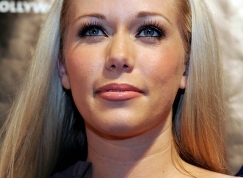 
Former Playboy Playmate Kendra Wilkinson has opened up about her struggle with postpartum depression, insisting she felt she had "nothing to live for" after becoming a new mum.

The reality TV star welcomed baby Hank Baskett IV, named after his football star father, in December at a hospital in Indianapolis, Indiana.

But the 24 year old struggled to adjust to motherhood as she was pulled into a downward spiral of post-pregnancy sadness.

She tells OK! magazine, "After giving birth, I never brushed my hair, my teeth, or took a shower. I looked in the mirror one day and was really depressed. I thought, 'Look at me.' I had this glamorous life in LA, and now (in Indianapolis) I didn't.

"A couple of times, I even said, 'I just have nothing to live for.'"