Wild Marbella with Dr Venom:Spiders of the Golden Mile 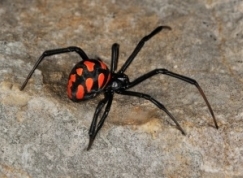 Spiders of the Golden Mile

Dr Venom’s pick of Dangerous Spiders & Arachnids you may encounter!

No.1: The Black widow

The Black Widow is the most Dangerous Mediterranean spider and occurs throughout Andalucia. A close relative of the deadly Red Back Spider of Australia Latrodectus hasselti, the Mediterranean Black Widow Latrodectus tredecimguttatus (Rossi, 1790) is just as notorious. Known as the ‘Viuda Negra’ in Spanish, the female is easily recognised; a glossy black spider with pea sized abdomen, usually with red bars or spots and a leg span of around 25mm. The male is slightly smaller.

Widow spiders are mainly nocturnal, spinning sticky tangle webs in which to catch their prey. Once caught, the widow injects lethal venom that quickly kills its victim before eating it. They usually prey upon insects like crickets, but are able to overpower larger prey such as scorpions by wrapping them in gummy silk. Latrodectus tredecimguttatus is considered the most dangerous spider in Europe. Other species of Latrodectus to occur in the Mediterranean region include Latrodectus hystrix, Latrodectus lilianae, the White Widow Latrodectus pallidus and the Brown Widow Latrodectus geometricus which are not as venomous.

Most victims are usually bitten on their hands or arms; these should be kept below the heart level and the patient be immobilised until help arrives. Medical attention should be sought immediately. It is important that doctors are advised of the identity of the spider using this field guide. The severity of the condition will depend on the amount of poison inoculated and the health of the victim. Sometimes very little or no venom is injected resulting in a ‘dry bite’ although some victims may require treatment for shock.

Treatment may include the use of painkillers and muscle relaxants. The general treatment for serious cases is an intravenous dose of 10% calcium gluconate solution, magnesium sulphate and diazepam. The antivenin for Latrodectus is no longer produced in Europe due to the lack of demand and costly production process.

The False Black Widow Steoda paykullianus resemble the more venomous Black Widows. They similar in size, glossy black with either a red, white, yellow or orange band at the front of the abdomen. The similar looking S grossa is uniform black, whilst S bipunctata is glossy brown with variable white markings. The False Widow Spiders (Steoda) are mildly venomous to humans. Widespread throughout the Mediterranean region

Material in these articles has previously been published in Poisonous Creatures of the Mediterranean Bites, Treatments & Identification by Vejay K Singh

- ARACHNOPHOBIA is the fear of spiders, and is the most common phobia among humans; 1 in 3 people affected!

-Only a small number of spiders are actually Dangerous; even venomous species rarely bite people.

-Spiders are very beneficial to our eco-systems, as they prey upon disease carrying insects and household pests.

-Spider silk is the strongest natural fibre known to science, over six times stronger than steel!

Be Aware of Spiders of the Golden Mile Vol.2 (3)