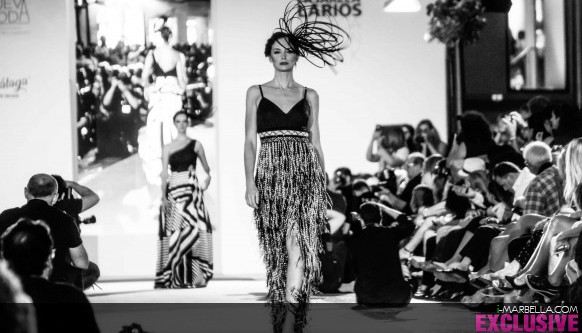 
The 2017 Edition of Pasarela Larios was a total success and here we have one of the many galleries we will be uploading!

The emblematic street Marqués de Larios surprised and changed its usual appearance to give way to an atmosphere of creativity, fashion and wine, on the occasion of the seventh edition of the Larios Malaga Fashion Week, making Málaga one more year in reference point of the national and international fashion during the past days 15 and 16 of September 2017.

Malaga's greatest fashion parade has come to an end. The commercial heart of the capital has been re-dressed for two days in its finest galas to host the largest blue carpet in Europe. More than 300 meters that witnessed - one more year - the proposals of the bridal fashion sector and ceremony for next season.

An atmosphere of illusion was felt among those attending a walkway, which as every year, is held in the heart of the city and outdoors.

An ideal climate that contributes to a good taste of the mouth to two intense days where the fashion has captured all the attention.

The attendees were able to know the creations from the first day of the contest until the day of the parade when the winner of the Ribera del Duero Prize for Young Designers was announced in Pasarela Larios 2017.

Pasarela Larios Malaga Fashion Week, with more than 300 meters in length, congregates more than 15,000 people every day. An event organized by Nueva Moda Producciones with the collaboration of the Málaga City Council, Association of Guilds, Touch Communication, Linda Magazine, AC Palacio de Málaga, El Corte Inglés, Onda Cero and D.O. Ribera del Duero, will once again turn Malaga into a point of reference for national and international fashion. In its 6th edition, it has been positioned as a cultural and tourist event of the first level. An event that aims to support trade and the local economy, providing a space in which creators can show the latest trends and novelties of their collections directly and close to the public.