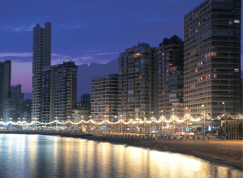 
The resort is to target more wealthy tourists

Benidorm wants to become the Las Vegas of Spain with a new initiative that would allow 4 and 5-star hotels to host mini-casinos inside their premises.

The initiative was proposed by Hosbec – Benidorm’s hotel association and so far has received support from Benidorm’s town hall.

The initiative hopes to attract wealthier tourists amid an increasing decline in visitor figures and tourist spending (Currently Benidorm tourists are spending an average 63 euros per day, well below Spain’s average of 96 euros).

Toni Mayor, Hosbec chief said: “It is important to do it as quickly as possible, as our future depends on attracting this type of tourist.”

Benidorm attracts around 6 million tourists a year, out of which 1 million are from the United Kingdom.