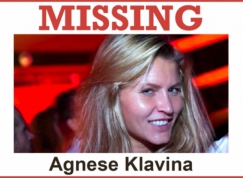 The police are stepping up their investigation into the disappearance of Agnese Klavina, the 30-year-old Latvian girl, who has been missing since the early hours of Saturday September 6.

The last sighting of Agnese was talking to a woman outside a popular nightclub in Puerto Banus, at approximately 6am, after spending the evening inside the club with friends. CCTV footage has been seized by pólice and their investigation continues.

A member of staff from within the club has confirmed to the Euro Weekly News that the CCTV footage shows Agnese with a group for a period of time and goes on to show her leaving with some of the same group.

A photograph taken that night inside the club, shows Agnese, wearing a long maxi dress in pink, turquoise and white Aztec design and sitting at a table with five presumed acquaintances. She was carrying a large white Luis Vuitton bag. Agnese is around 1.70cm tall, with green eyes and medium length blonde hair.

Her mother and sister have travelled to Spain from Latvia to help with the investigation.  Her mother said: “It was very unusual for her to vanish without telling anyone.”

The Spanish police have ruled out the prospect that she disappeared voluntarily, after finding all her credit cards and important documentation left in her house.

If anyone has any information, sightings or remembers anything from being inside the club assisting in the police investigation, please call the Local Police on 092.