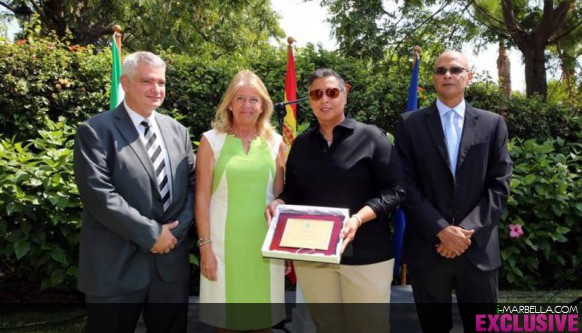 
The municipality of Marbella, Spain has installed in the roundabout located next to the avenue Mohamed Ashmawi a monolith in honour and recognition of more than 4 decades of work of this Saudi businessman with the city of Marbella on September 9, 2019.

Among other things the mayoress of the city Ángeles Muñoz spoke frankly about the 40 years in which the sheikh worked as one of the greatest ambassadors of Marbella and spoke personally of how on his arrival in office he could see how sociable the man was and the affection that everyone in the city and the administration had for him.

Besides, the mayoress sent her regards to Mrs Elly Al Ashmawi, mother of the family and wife to Sheikh Mohamed, who couldn't assist the ceremony while recovering from broken hips.

Besides, the contribution of the Ashmawi family to project the image of Marbella in the international arena has been highlighted, including the Al Andalus Television channel which promotes Marbella, and it's surroundings with a Nile Satellite Station to the Arab world and beyond.

For their part, the children of the Saudi businessman thanked the tribute by the mayor's office. His daughter, Neeveen Ashmawi, commented that it was a great honour and that she was grateful for the fact that her father's name was kept alive.

On his part, Sheikh Ahmed Ashmawi is taking now the role of head of The Al Ashmawi family, and, along with his brothers will keep alive the hard work and love for the city of Marbella.

Ever Since then, Sheikh Mohamed was a fierce promoter of the city at such a level that he opened United Nations offices in San Pedro de Alcántara in his capacity as chairman of the U.N. board in Andalusia.

Get to know more about Sheik Mohamed Ashmawi and his work HERE!