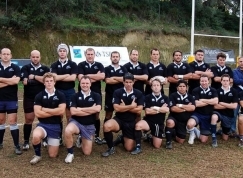 It did not look an easy match on paper against a historically touch rival and the occasion did not disappoint. Both teams had a lack of players, though for very different reasons. The Sevilla side, following the incidents of a few weeks ago, were missing  players due to suspension, while Marbella had a smaller squad due to work and personal commitments of at least half a dozen players.

Marbella had a higher level of concentration and discipline from the first whistle. Highly motivated by the importance of a match against a fierce rival  the Marbelleros soon showed their credentials. With the first two attacks in the opposition twenty-two came the first points, thanks to the success of the hitherto invisible kicker this season, Salem.

With a  6 - 0 lead  on the scoreboard, the locals were able to control the tempo of the game, despite the dynamism of the visitors in open play. Instead, Marbella kept their opponent static, by winning the set piece, throw-ins and especially in the scrums, where the front row was made up of local boys  Morales, Santi and Goofy were far superior to their opponents.

At the break the score was 11 – 0 in favour of Marbella thanks to a try at the end of the first forty minutes, scored by Salem who by the end was to be the star of the show. With the restart came much of the same and  every time Marbella  entered the twenty-two they turned it into points. However, with the rain came plenty of handling errors.

Marbella scored  another converted try and a penalty, before a late try by the visitors, making the final score at 21 – 5. The man of the match was young Salem, who scored all the team’s points for Marbella, solidifying his best game since he came up to the first team. Without a doubt, he´s another great achievement from the excellent rugby school of Marbella.