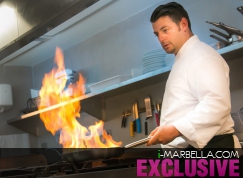 Ladislao Comins is the head chef at Les Cubes.

Ladislao was born in Alicante (Valencia, Spain), nut was influenced by both English and American ideas. That is the reason why he is always aware of the vanguards, especially as far as cocas are concerned.
Among his most important awards they are:
One of his specialties that can be enjoyed at Les Cubes are cocas. The Coca is a pastry typically made and consumed in Catalonia, eastern parts of Aragon, most of Valencia, the Balearic Islands, Andorra, and in French Catalonia.
Ladislado admires Martin Berasategui as he "created his genius from very honest and raw material". He also admires Quique Dacosta, his countryman.

Les Cubes: A Journey of Flavours