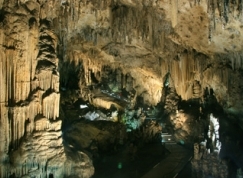 
The cave could contain the oldest cave paintings of humanity.

The ex Minister for Employment under José María Aznar, Manuel Pimentel, has taken part in the TV series on the Cuatro channel, ‘Cuarto Millenio’ to talk about the paintings to be found in the Nerja Caves.

He told the audience that recent carbon dating had shown that the paintings found in the caves are much older than previously thought. The data indicates that they are more than 40,000 years old, and that would make them oldest in Europe, and they could be the oldest cave paintings of humanity.

The curator of the caves, Antonio Garrido, told Europa Press that the carbon dating research is a multi-discipline project of conservation and research which started in 2008, and is helping in the study of the extinction of Neanderthal man, and his possible living together in the cave with Homo Sapiens.

Organic matter was taken from close to the paintings in the upper galleries of the caves, known as the Sala de Cataclismo, and sent to the United States for dating, which in both cases came back at more than 40,000 years. The researchers are now trying to establish whether the remains that were dated were in the cave before it was inhabited.

The zone from Nerja to Gibraltar is considered by researchers to be the last area inhabited by Neanderthal man, before his extinction.

The Cave of Nerja is located 50 Km far from Málaga City. Access from Málaga is very easy and is made through Autovía del Mediterráneo A-7 (Mediterranean Highway), direction Almería.

Exit 295, signed as “Cueva de Nerja” will drive us directly to the Cave. Besides, a regular bus line connects the cave with Málaga, capital provincial city.