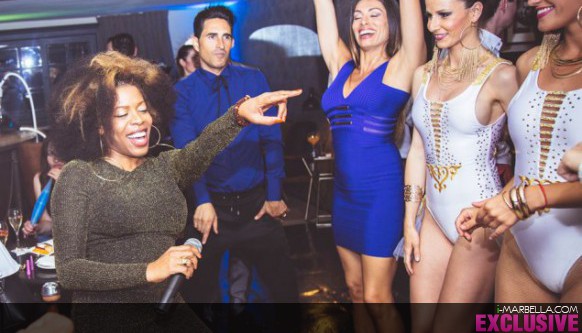 Yanela was invited to perform in "Madrid" representing Latin music in Spain with "La Comercial Cubana" and "Sabor Havana" for three years. She was the protagonist of the Musical "Bolero" with Rafael Basurto leader of Los Panchos performing thru out Spain. She features as a musical composer of the soundtrack "Tú no eres nada" in the Spanish feature film "Tangier" alongside actors Antonio Resines, Ana Fernández and Jorge Perrugorria among others.

MTV Latino, 40 TV, Kiss TV, Sun Music and Divinity Channel have singled out this song, which has already become one of the summer's favourite videos. Notably, Yanela has been selected to be part of the 40 National (Spain) Tour, travelling across geography in summer - autumn-winter 2013 and 2014.

On December 5, 2012, this Cuban artist was chosen to sing Spain's national anthem with lyrics by Jon Juaristi in front of more than 30,000 people located on Plaza de Colon (Madrid) the Spanish capital.

Yanela has performed across the globe as well in front of European royalty and other international figures such as Producer "Quincy Jones", "Amaya Zwaroski", "Chris Tucker", "Isabel Presley", "Beatrice de Orleans" and others.

Collaborating with Jesus Quintero, she distributed her first Television DVD, highlighting her top performances on Spanish TV. Also, she has participated in various musicals.

Her second DVD recorded at the Hotel Puente Romano is the official tribute from Marbella to the King of Pop "Michael Jackson" where Yanela delights us with Classical Soul, Disco, Rock and Latin Music. She recently composed the Spanish lyrics of Marbella Town.

Finca Besaya was blown away by the incredible talent and voice of Yanela! She sang 2 of her songs and the party was on fire!

Finca Besaya is a farm with the tradition that preserves the Mediterranean essence; it reminds a town that conserves the history of the past with dyes of modernity. This spirit is transferred to the kitchen with professionals from England and France, giving Finca Besaya a stamp of identity difficult to find on the Costa del Sol.

Culture flourishes in every corner. The ground floor where, at the beginning of the night, you can enjoy aperitifs with an incredible view of the mountains, where you can choose between picturesque and exclusive rooms, in summer season you can enjoy our magnificent terraces.

The excitement of the flavours and our nights at Finca Besaya merge with the live music and the spectacle of lights and sound that make our home each night its place of meeting and fun.

A door to the senses that will always be open to you.

I am Shannon by name. Greetings to every one that is reading this testimony. I have been rejected by my husband after three(3) years of marriage just because another woman had a spell on him and he left me and the kid to suffer. one day when i was reading through the web, i saw a post on how this spell caster on this address Makospelltemple@yahoo.com , have help a woman to get back her husband and i gave him a reply to his address and he told me that a woman had a spell on my husband and he told me that he will help me and after 2 days that i will have my husband back. i believed him and today i am glad to let you all know that this spell caster have the power to bring lovers back. because i am now happy with my husband. Thanks for Dr.Mako. His email: Makospelltemple@yahoo.com OR. his phone number: +2348108737816.
0