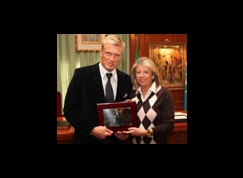 
The Hollywood star has lived in Marbella for several years

Marbella Town hall yesterday officially appointed actor Dolph Lundgren, best known for his role as Russian Boxer Ivan Drago in the Hollywood Blockbuster “Rocky IV” as Ambassador for Marbella. Mayor Ángeles Muñoz commented that it was “a true privilege that well known figures such as Dolph Lungdren, who could have chosen any town to live in, decided to make ours his home”

Dolph commented “Marbella is a very special place for my family. It’s a marvellous city where we can enjoy life to the full”. The actor also praised the “warth and hospitality of the people who know how to enjoy life”


In his role as Ambassador, Dolph spoke of his love for Marbella and promised that he would promote the town in a positive light

Dolph is currently filming "The Expendibles" with an all star cast including Silvester Stallone, Mickey Rourke, Jet Li, Brittany Murphy, Eric Roberts, Arnold Schwarzenegger and Bruce Willis. The film is due to be released in April 2010.