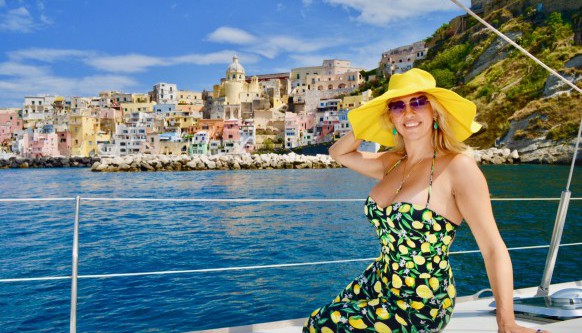 
In July 2019, I went with my family and friends to Italy to discover the sea on a sailing yacht named Acustica. Sorrento, Capri, Procida, Positano, Naples so many wonderful sights of Italy to discover by the sea!

Our first destination after landing was getting a boat at Ana Lucia marina towards Procida-The Secret Island in the Bay of Naples.

The charming island of Procida, with pastel-colored harbors, its quaint cobbled streets, and its secluded coves makes a perfect getaway from the city.

Procida is the smallest of the three Poet's Islands (Ischia, Procida, and Capri) and remains relatively undiscovered among international travelers.

Pastel-colored houses showcased perfectly presented floral displays, authentic Italian salesman organized their products at the harbor, and Italian fisherman pushed their boats out of the sea.

By Sailing boat you see destination from a different perspective! This way you get to see the beautiful coastline silhouette at day and night.

All these islands are amazing, whether on full moon nights, sunsets or sunrises you feel fresh all the time and need to adapt to the constant swinging and shaking of the sea.

Believe me, not everyone can take it! It is a challenge to cook and clean on the boat, but at the same time, it is just an amazing experience.

Besides, the Mediterranean Sea water is warm in July and August, and it is just fantastic to swim or paddling with SUP at Procida or Capri Marina Piccolo.

Very comfortable with four suite cabins with all amenities, a central salon, kitchen, captain table, and deck salon. It also had a toilet and shower in the room, sure it is all in one but still very comfortable.

Here you can see more about the boat!

Arriving early at the port di Procida as we did we had incredible swimming, paddling and holiday day at the bay of Corricalla Bay. Then, we spend a few hours on the afternoon navigating on the streets on Procida Island of Italy!

Procida, the history and the sights

Procida was really amazing, it has a labyrinth-style network of narrow streets and passageways. We admired the storefronts and patisseries that are so quintessentially born of a classical southern Italian style.

We were sailing to Corricalla Bay, and the first thing we saw was Terra Murata, a great 15th- century walled city and one of the main attractions of Procida island. From there you can witness incredible views over the sea, as well as a birds-eye view of colorful Corricalla Bay that is always depicted in photographs and postcards of Procida.

Two of the main highlights of the Terra Murata are the Abbazia San Nichele Arcangelo and the Santa Margherita Nuova Castle, both of which are completely free to enter.

The Abbey dates back to the 11th century and is considered one of the most important churches in Southern Italy.

Lunch and Dinner at Corricalla Bay!

The charming Corricalla Bay is the perhaps the jewel in the crown of Procida island and makes a perfect spot to stop for lunch or dinner!

We had lunch on the boat, made by Captain Tanel Urm and dinner at the marina in one of the restaurants.

Located just a short walk from the Terra Murata, ramshackle fishing boats and traditional taverns greet you as you approach the bay! The restaurants here specialized in seafood delicacies which are prepared with the freshest ingredients caught earlier that day.

As an interesting tip, I got to know that Corricalla Bayss name originates from the Greek “Kora Cale” which means “nice area”

Dining in Corricalla Bay places you right beside the Santa Maria Dele Grazie-the iconic domed churched that has become the symbol of Procida island.

Then, on Second-night of our trip we successfully survived one night of storm and thunders –Next time, I would choose to stay in the countryside when the sky is that grey.

Finally, when the sun raised we sailed to Capri!  But I’ll tell you more about it in my next blog