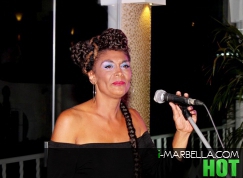 
Amparo Velasco 'La Negra' is a gypsy raised in Elche Alicante, Spain, who made an appearance at Les Cubes on September 4, 2015.

La Negra is famous for her black complexion, her "tosted" voice, and for the music she records -- jazz, latin jazz, tango, Brazilian music, and flamenco.

The debut album by La Negra was produced by Javier Limón. Working on this album, La Negra collaborated with such musicians as Niño Josele and Jerry González. Her first solo album reveals a voice and performing ability that soar over the styles and songs.

Les Cubes is an experience in four dimensions that we developed in three buckets: C'est la vie, Kalinka Malinka, and a lounge bar To Be or Not to Be.