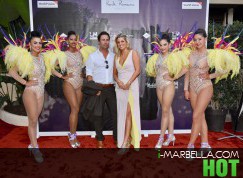 Desiree Florida and Simon Bold married on December 12, 2016 in The Bahamas Kamalame Cay 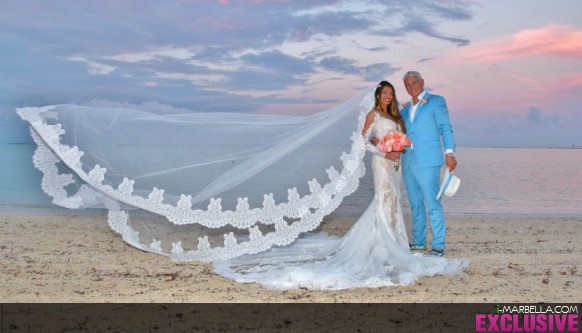 
Desiree and Simon got married on December 12, 2016 and celebrated their wedding on a private island in The Bahamas called Kamalame Cay, where Nicole Kidman, Penelope Cruz, Javier Barden or even the Rolling Stonen have been around this idyllic place.

Just 10 minutes from Nassau is the beautiful little island.
To accompany the couple, 35 guests arrived the day before the ceremony, all on private planes. That same day they had a BBQ on the beach, they could enjoy the sunset with cocktails and they enjoyed a nice dinner.

For the wedding, they chose pastel colouring. that evening the pastel palette reigned the decoration and "dress code" for the guests. Gents went in white shirt and pants and each one wore a Panama hat with which they were presented. Together they created a perfect and delicate harmony.

Simon, the father of the bride and his son (godfather, Bestman) chose to go sky - blue as the Caribbean sea. The suits were made to measure and they decided to do it in London in Savile Row. The bride's dress was veiled and an umbrella from the Pronovias atelier collection with an infinite tail that simulated the waves of the sea or a tail of a mermaid.

The symbol and logo were the seashell or shell as the Bahamians call it and were designed by the well-known painter Adolfo Cordoba.

They used it in the decoration of the table and also in the invitation cards.

The rings were also carried in sea shells before delivery.

The ceremony was held on the beach with a floral arch of roses in coral colour as well as the bride's bouquet, chairs were decorated with starfish and each of them palm leaf fans.

The ceremony was emotional and fun with unforgettable moments.

At the end, the soundtrack of Nina Simone sounded and they walked the long corridor decorated with coconuts and all the guests filled the sky with bubbles of soap.

There was also a surprise for the guests, a group of dance and music, typical of the islands; A group of Junkanoo where the dance began to have a break at dinner, there were also beautiful speeches and songs sung a chapel by the singer José Antonio Valdillo.

The food was exquisite: Thai soup with coconut, lobsters, plus a roasted suckling pig especially for the event, ...

All washed down with Champagne, wines, cocktails ... the party continued with the Dj, the couple's dance and another big surprise with stunning fireworks in the sea, Chinese lanterns and a big bonfire in the sand.

No doubt something that the couple will happily remember, as if it were yesterday, each and every one of those details lived.

Here you can see the video of Simon & Desiree's wedding invitation.