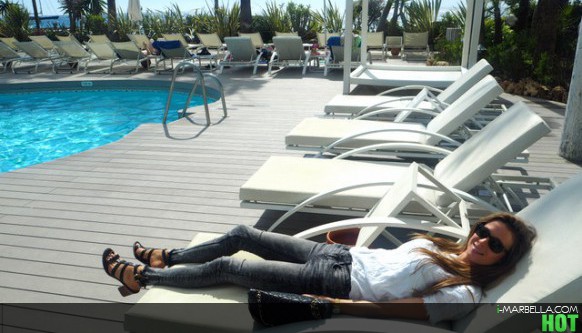 After the most depressingly long hibernation, and several bouts of rotten flu, the shiniest of tickets came my way; an invitation to stay at the Puente Romano Beach Resort & Spa on Spain’s Golden Mile, Marbella, where the sun shines for 320 days a year! HOORAY!

Grabbing my friend Charlotte Cowen en route, I arrived at the most luxurious of hotels.

Designed to recreate an Andalusian village, the beachfront Puente Romano, with its endless array of restaurants, three swimming pools, Six Senses Spa and newly opened nightclub, La Suite, had everything both our mischievous and holistic desires required.

Our room was found amongst the white-washed walls and baskets of geraniums of the grounds, and we were thrilled to find we had a gorgeous little balcony (room service locaaay sorted!) and adorable beach baskets and towels as gifts.

The heavenly Six Senses Spa offers an array of treatments, and Charlotte and I were generously treated to a hugely relaxing Couple's Massage (hilarious!) in one of the spa’s nine treatment rooms.

There is a gym and a tennis court on site, and the resort is also very close to Marbella's old town, but given that there are nine (yes, nine!) restaurants throughout the resort, it is quite possible to spend your entire stay hopping from one to the other… I can think of worse ways to pass the time! The Sea Grill is right on the beach and where we were treated to an array of fresh seafood and sushi on our first night.

Two-Michelin-star-holding chef Dani Garcia's playful concept restaurant Bibo was where we spent most of the next afternoon (I'm not even kidding, we feasted for for what seemed hours – NOT that any of us were complaining!) With an imaginative menu and Alice in Wonderland'esq touches in abundance (even the list of cocktails were presented in the form of Tarot Cards, which I made each of our party choose from -- best game ever?! #EveryonesAWinner) the beyond imaginative tasting menu left us defeated, but amazed (I’d fly back merely for another portion of his INSANE New York-inspired cheesecake!)

We also enjoyed a delicious evening of sushi at UNI, several Turkish Delight smoothies at Rachel’s Organic Cafe (above, also my favourite spot at the hotel for sun bathing and reading) and a very healthy lunch at Celicioso, Marbella's only 100% gluten-free restaurant.

You also might not expect to find Marbella's hottest new club amongst the sub-tropical gardens of Puente Romano, but this hotel is full of surprises as well as palm trees. La Suite held its glamorous launch party on our last night, and launch it we certainly did! With a mixture of old Roman architecture and ultra-modern touches, the club is the perfect addition to the resort and will no doubt, be well frequented by guests and local revellers alike.