Spain Named Most Tourist-Friendly Country in the World 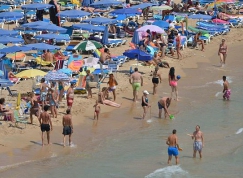 One of Britons' favourite holiday destinations has been named the most tourist-friendly country in the world for the first time thanks to its 'excellent' culture, entertainment, and infrastructure.

Spain defeated its European rivals in the World Economic Forum's biennial travel and tourism competitiveness report, which said its position atop the rankings is 'a positive sign for the country's nascent recovery'.

France came in second place and was followed by Germany, the US, and the UK, which rounded out the top five.

Each country receives a score in 14 categories, from business environment and safety to health and competitive prices, with the final rankings being determined by an average.