The Airport, My Home 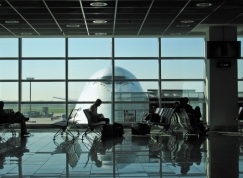 For many, the Tom Hanks character in The Terminal is as far from real life as you get. The story of a man who ends up living in an airport terminal, while a good yarn, was far-fetched. No-one does that in real life.

One of them is Edu. He decided to go out for a walk. But not for just any walk. He planned to walk the 332 kilometres that separate Madrid from Zaragoza. He was not exactly busy at the time. If it is difficult for the average man to find a job, it is even harder for a man who has just been released from prison after 10 years behind bars.

He did the maths and calculated it would take him roughly 20 days to reach his goal. On the first day, dusk found him looking for the Barcelona motorway, and he decided to spend the night at Terminal 4 in Barajas Airport. And that was the end of the road for him.

Fast forward a year and a half and Edu still lives at the airport, surrounded by flight crews, passengers, and suitcases. And he is not alone.

Close to 30 homeless people call Madrid airport home, most of them invisible to the average traveller.

But just how do they manage to blend in and go unnoticed? The trick lies in looking just like them. They are well-dressed, look clean, carry their luggage around like normal tourists, and some spend all day long walking around the airport window shopping as if they were waiting for a plane that will never take off.

Technically speaking, airports are public places, so ENAIRE – the Spanish public body that operates most airports in Spain – lets them live there as long as they do not cause any problems.

Some have come up with a clever way to earn a few euros: they use small hooks to pull the luggage trolley tokens out of the vending machines and sell them to the passengers. "We do what we can to survive," said Andre (fictitious name).

When it gets dark and the temperature drops, even more homeless move in for the night and sleep on newspapers scattered on the floor of the terminal’s hidden corners.

But while Tom Hanks' character had a happy ending, there is no such finish in sight for his Spanish equivalents. For them a lonely Christmas is in store.

The Pope says goodbye to Spain