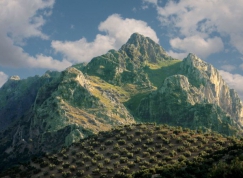 
Find out these 10 most geologically spectacular spots in Spain!

1. Sobrarbe, Huesca
Sobrarbe, in the Aragonese province of Huesca, is home to some of the most striking landscapes in the entire Pyrenees, from the calcareous summits of Treserols to the canyons of Ordesa and Añisclo (pictured), the valleys of Pineta and Escuaín, the Posets massif, the valley of Chistau and the Sierra de Guara mountains. / www.geoparquepirineos.com

2. Molina de Aragón and Alto Tajo, Guadalajara
A new Spanish member joined the European Geopark Network in March of this year: the Molina de Aragón and Alto Tajo geopark in Guadalajara province. Its 4,000 square-kilometer area includes the Gallo River Gorge, the fossil forest of Aragoncillo and the pit of Alcorón. The park's symbol is aragonite, a variety of calcite that crystallises in hexagonal prisms and was first described thanks to samples found in Molina de Aragón. The photo shows the ravine at Molina Gorge. / www.geoparquemolina.es

3. Cabo de Gata-Níjar, Almería
Dating from 10 million years ago, the formations at Cabo de Gata on the Almería coast are one of the largest magma-derived mountains in Europe. Old lava flows, volcanic domes, craters, and fossilised beaches make up a landscape that, despite looking like a semi-desert, is home to a variety of ecosystems, including more than 1,000 endemic plant species and some of Spain's most beautiful beaches. / www.degata.com

4. Sierra Norte, Seville
Seville's Sierra Norte mountains stretch from the mine at Cerro del Hierro (Iron Hill) to the spherical granite rocks of El Pedroso and Real de la Jara. In between, visitors can find the Los Covachos cave, the Huéznar River waterfall, the fossilised jellyfish of Peña Escrita, and over 170,000 hectares of cork oak, holm oak, and olive trees. / www.juntadeandalucia.es/medioambiente

5. Central Catalonia, Barcelona
Around 36 million years ago, Catalonia's interior was covered by a sea that disappeared as a result of the great folding process that gave birth to the Pyrenees. Among the products of that geological process are the Toll and Salnitre caves, the serrated peaks of Montserrat (pictured), and the Catalan potassium basin. / www.geoparc.cat/es

6. Subbéticas, Córdoba
The collection of limestone massifs extending southeast of Córdoba province, along the border with Jaén and Granada, show the effect of water over the course of eons. This is a chaotic landscape filled with pits and sinkholes, karst formations such as the limestone pavement of Los Lanchares, the Bailón River Canyon, and the Bat Cave, near Zuheros. The area is also known for its ammonite fossils – the remains of cephalopods that ruled the seas during the Jurassic and Cretaceous periods. The picture shows olive groves in Priego de Córdoba. / www.andalucia.org

7. Basque coast, Gipuzkoa
Fossils trapped for over 50 million years in the pastry-puff rock formation – technically known as flysch – along a 13-kilometer stretch of land on the western coast of Gipuzkoa have earned this place a spot in the European Geoparks Networks. Like a book written in stone, each stratum of flysch contains a 60-million-year-old chapter in the history of the Earth, from the Upper Cretaceous period (around 100 million years ago) to the Eocene (40 million years ago). / www.geoparkea.com

8. Villuercas-Ibores-Jara, Cáceres
Extremadura conceals unexpected landscapes, such as the one to be found at the Villuercas-Ibores-Jara geopark in Cáceres, where deciduous forests sit alongside olive groves, holm oak and fields of rockroses. It is a rocky place of jagged-peaked mountains that rise above the oak forests like dinosaur backbones. And beneath it lies a striking world of karst formations inside the cave of Castañar de Ibor, which was declared a natural monument in 1997 thanks to its eccentric calcite stalactites, arboreal shapes and delicate aragonite "flowers". / www.geoparquevilluercas.es

9. Island of El Hierro, Canary Islands
The eruption of an underwater volcano off the Canary island of El Hierro in 2011 is just the latest chapter of an epic geological journey that began 100 million years ago, when the seabed opened up and released the magma that formed the isle. The smallest and wildest island in the archipelago, its 278 square kilometres contain over 500 volcanic cones and nearly 70 lava-made caves such as Don Justo, whose galleries span over six kilometers. / http://geoparqueelhierro.es

10. El Maestrazgo, Teruel
From the heights of Gúdar down to the border with Lower Aragón, the Guadalope River crosses a network of mountains, peaks and canyons that were once home to the Sea of Tethys and monsters such as the Elasmosaurus. Its tracks, and those of other dinosaurs from the Jurassic and Cretaceous eras, are on display at nearly 70 paleontology sites inside the El Maestrazgo geopark. / www.geoparquemaestrazgo.com