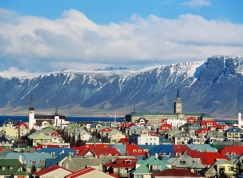 
Many of us are dream of sun, sea, and sand when it comes to booking a holiday, but next year's holiday trends prove this isn't always the case.

Secret Escapes has collected data from its database of over 6 million subscribers to reveal a list of the 10 most popular destinations for holidays in 2015.

Iceland has been named the number one spot, with four times the number of bookings as Spain, ranked second, and Italy, in third place.

Even more surprising is the trend for visiting destinations closer to home.

England has been ranked fourth most popular, Scotland seventh, and Wales isn't too far behind in tenth place.

"It's equally great to see that Brits are keen to explore the best of British, with affordable five-star breaks becoming the perfect solution for short trips throughout the year, whether that's a spa retreat, a city break, or country house stay," Doy adds.

Watch the video dedicated to the amazing facts about Iceland below!

Adapted from My Daily

Volcanic ash from Icelandic eruption could reach Spain on Thursday