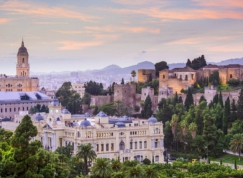 
Malaga has been named the second most exciting destination on the planet to visit in 2015 by one of the world's top travel guides.

The Andalucian city has been praised by Rough Guide for offering far more than just sun, sea, and sand, and is one of the guide's top 10 places to visit next year. Malaga came in behind only Johannesburg in South Africa as a must-visit global destination.

Each year, the Rough Guide editors and authors get together to compile a list of the destinations they think will be the best places to visit for the next 12 months. "Founded by the Phoenicians, the ancient city of Malaga has far more to offer than the usual Spanish cocktail of sun, sea, and sangria – though all of those things are still in plentiful supply," states the Rough Guide Top 10 Cities 2015.

"In 2015, a cube-shaped building will swing open its doors as an offshoot of the Centre Pompidou in Paris, featuring works by Malaga-born Pablo Picasso. Other projects signalling Malaga's cultural revival include a new museum of Russian art, set to light up a former tobacco factory, and the continued development of mural-daubed Soho, which attracts trailblazing street artists."

The Rough Guide's website features a video of Malaga in all its glory, profiling the city as one of the places to visit next year. Other cities to feature on the 2015 list include New Orleans in the USA, Wellington in New Zealand, and Hamburg in Germany.

Find out more at Rough Guides!