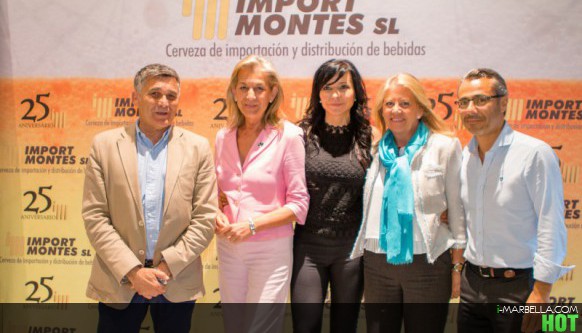 IMPORT MONTES, the most important distributor of beers and beverages on the Costa del Sol in terms of volume and service, celebrated their 25 years of unequalled commercial health.

In order to honour the occasion, yesterday, on May 17, Import Montes brought together the most notable figures in the hotel and gastronomy industries of the province of Málaga, an authentic gastronomic celebration, in which Import Montes were able to show all their support and recognition of the businesses and professionals in the area.

Furthermore, most of the brands which form part of the company assembled and decorated their own stands, 38 in total, between wines, refreshments, and other products.

The event was attended by many special figures such as the Mayor of Marbella, José Bernal, the first Deputy Mayor of the Marbella Town Hall, Blanca Fernández, the Cleanliness, Parks and Gardens councillor, Francisco García, the representative of tourism of the Marbella Town Hall, Miguel Luna, the Senator Ángeles Muñoz, the congresswoman Francisa Caracuel, the vice-president of the Association of Municipalities, José Eduardo Díaz, and other councillors from the PP, the Mayor of Montejaque, Diego Sánchez, the president of CIT Marbella, Juan José González, the president of REM, Cristina Mintegui, and the president of ADISABES, Salvador Pérez.

The day, led by the popular speaker Sr. Corrales, began with an act of giving thanks and showing commitment to clients and employees on behalf of the company, many of which have been present since the beginnings of the business. There were: Les Roches Marbella, the entrepreneur Juan Carlos Ferrero, La Havana de Heminguay, Olivia Valere, Sinatra Bar, Club Nueva Alcántara, Sabor a Málaga, Puente Romano Beach Resort and Spa, Grupo Trocadero, Miguel Arrocha, José Luis Yagüe, los Mellizos, Da Bruno, Santiago Domínguez, La Relojera and California.

It is important to emphasise the plaque awarded to one of the employees, Antonio Martín, for service and loyalty to the company. Before the awards, the first Deputy Mayor of Marbella, Blanca Fernández, expressed her pride in attending a day for “a business which reinforces human values and elevates Marbella's name”. Furthermore, Fernández congratulated the compay, wished them luck, and encouraged them to keep on growing.

Some of the most important chefs in the area, such as Michelin-starred Diego del Río (El Lago), Diego Gallegos (Sollo), the reputable Lutz Bösing (El Jardín of Finca Cortesin), Aitor Perurena (Estudio gastronómico), and Santiago Domínguez didn't want to miss the occasion either. In fact, they were the protagonists of one of the most notable activities of the day, a round table in which they were accompanied by many students from the hotel schools of the Cónsula, Estepona, and Benahavís. It was an enriching and informative moment in which the professionals were able to give their best advice to inquisitive students full of hopeful anticipation.

During the meeting, the Oktoberfest area was also notable, with the company's most important beers, as was the chillout zone with drinks, a barista, and cocktail barmen, in which the presence of Pedro García, the 2013 Cocktail Acrobatic Champion of Spain, was enjoyed.

In short, it was a good opportunity for attendees to learn more of Import Montes' portfolio, and an event in which consumers and providers were able to establish productive contacts.