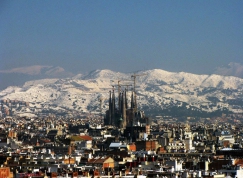 Google Street View has made available 50 most iconic landmarks of Spain, including a 360-degree tour of the Sagrada Familia and many more.

Users can explore such sites as the Alhambra, the moorish hilltop fort in Granada, or see Gaudi's majestic Sagrada Familia, one of the symbols of Barcelona.

Other added landmarks include Galicia's Roman 'Tower of Hercules' lighthouse, the cathedral of León, and Madrid’s Congress of Deputies.

Among the Spanish wodners, there are many World Heritage Sites declared by UNESCO.

Google reports that many more prominent landmarks of Spain will soon be available on Street View.

Google to Shut Down News Service in Spain