Málaga Yesterday and Today in Pictures 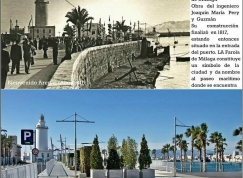 
Málaga's history spans about 2,800 years, making it one of the oldest cities in the world.

Málaga is a municipality, capital of the Province of Málaga, in the Autonomous Community of Andalusia, Spain. With a population of 568,479 in 2013, it is the second most populous city of Andalusia and the sixth largest in Spain. The southernmost large city in Europe, it lies on the Costa del Sol (Coast of the Sun) of the Mediterranean, about 100 km east of the Strait of Gibraltar and about 130 km north of Africa.

It was founded by the Phoenicians as Malaka about 770 BC, and from the 6th century BC was under the hegemony of Ancient Carthage. Then, from 218 BC, it was ruled by the Roman Republic and later, the Roman Empire as Malaca (Latin). After the fall of the empire, it was under Islamic domination as Mālaqah for 800 years, but in 1487 it again came under Christian rule in the Reconquista. The archaeological remains and monuments from the Phoenician, Roman, Arabic, and Christian eras make the historic center of the city an "open museum", displaying its history of more than 3,000 years.

This important cultural infrastructure and the artistic heritage have culminated in the nomination of Málaga as a candidate for the 2016 European Capital of Culture.

The internationally acclaimed painter and sculptor Pablo Picasso, Hebrew poet and Jewish philosopher Solomon Ibn Gabirol, and actor Antonio Banderas were born in Málaga. The magnum opus of Cuban composer Ernesto Lecuona, Malagueña, is named for the music of this region of Spain.

The most important business sectors in Málaga are tourism, construction, and technology services, but other sectors such as transportation and logistics are beginning to expand. The Andalusia Technology Park (PTA), located in Málaga, has enjoyed significant growth since its inauguration in 1992.

Málaga is now the main economic and financial centre of southern Spain, home of the region's largest bank, Unicaja, and the fourth-ranking city in economic activity in Spain behind Madrid, Barcelona and Valencia.