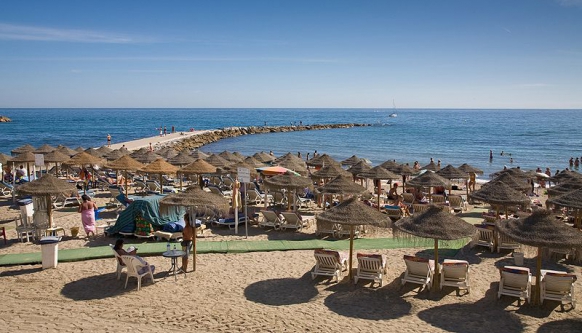 Marbella is a city and municipality in southern Spain, belonging to the province of Málaga in the autonomous community of Andalusia. It is part of the Costa del Sol and is the headquarters of the Association of Municipalities of the region; it is also the head of the judicial district that bears its name.

Marbella is situated on the Mediterranean Sea, between Málaga and the Gibraltar Strait, in the foothills of the Sierra Blanca. The municipality covers an area of 117 square kilometres crossed by highways on the coast, which are its main entrances.

In 2012 the population of the city was 140,473 inhabitants, making it the second most populous municipality in the province of Málaga and the eighth in Andalusia. It is one of the most important tourist cities of the Costa del Sol and throughout most of the year is an international tourist attraction, due mainly to its climate and tourist infrastructure.

The city also has a significant archaeological heritage, several museums, and performance spaces, and a cultural calendar with events ranging from reggae concerts to opera performances.

What is known as Marbella's Golden Mile is actually a stretch of 6.4 km, which begins at the western edge of Marbella city and stretches to Puerto Banús. The area is exclusive and home to some of Marbella's most luxurious villas and estates with spectacular views of mountain and sea, such as the Palace of King Fahd, as well as some landmark hotels, among them the Melia Don Pepe, the Hotel Marbella Club and the Puente Romano Hotel. The area developed during the tourism boom of the 1960s, where may be found the ruins of the Roman villa by the Rio Verde, and El Ángel, where the land of the old forge works was converted to an agricultural colony, and the Botanical Gardens of El Ángel with gardens of three different styles, dating from the 8th century.

The Golden Mile is divided into two parts by a motorway that runs through it. Along the motorway are strings of business centres, five-star hotels, golf course and other services.

The Golden Mile should not be confused with the New Golden Mile which is a marketing name given to the area between San Pedro del Alcantara and Estepona.

The traditional cuisine of Marbella is that of the Malagueño coast and is based on seafood. The most typical dish is fried fish, using anchovies, mackerel, mullet or squid, amongst others. Gazpacho and garlic soup are very typical. Bakeries sell oil cakes, wine donuts, borrachuelos (aniseed rolls fried with a little wine and dipped into syrup), torrijas (similar to French toast) and churros (fritters). In addition to the traditional native cuisine, there are many restaurants in Marbella that serve food of the international, nouvelle, or fusion cuisines.

Marbella is protected on its northern side by the coastal mountains of the Cordillera Penibética and so enjoys a microclimate with an average annual temperature of 18 °C. The highest peaks of the mountains are occasionally covered with snow, which usually melts in a day or two. Average rainfall is 628 l/m², while hours of sunshine average 2,900 annually.