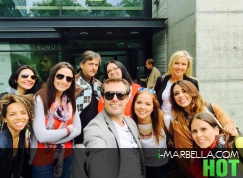 
In July, Dr. Kai Kaye took his team from Ocean Clinic Marbella to the beautiful medieval city of Tallinn for a long weekend of fun, relaxation, and culture.

The days were spent exploring the narrow cobbled streets of the city, museums, galleries, and the Old Town market. The team spent their evenings dining ata some of Tallinn's many excellent restaurants.

The Ocean Team were charmed by Tallinn and its very friendly people.

Tallinn is the capital and largest city of Estonia.

Tallinn occupies an area of 159.2 km2 and has a population of 436,576. It is situated on the northern coast of the country, on the shore of the Gulf of Finland, 80 km south of Helsinki, east of Stockholm and west of Saint Petersburg. Tallinn's Old Town is listed as a UNESCO World Heritage Site. It is ranked as a global city and has been listed among the top 10 digital cities in the world. The city was a European Capital of Culture for 2011, along with Turku in Finland.

The city was known as Reval from the 13th century until 1918 and again during the Nazi occupation of Estonia from 1941 to 1944.

Ocean Clinic Marbella is one of the most modern clinics on the Costa del Sol, offering a complete range of surgical and non-surgical cosmetic treatments and dentistry.

The clinic was founded in 2008 by Dr Kai Kaye, who is a registered Plastic Surgery Consultant in Germany, Spain, and the UK. Dr Kaye regularly lectures at national and international conventions and teaches at Plastic Surgery Resident courses. Dr Kaye and his team also carry out charitable work, providing reconstructive surgery and dental work to patients in developing countries.