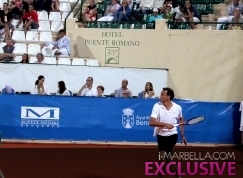 
Marbella Masters took place on the 25-27th of August in Hotel Puente Romano and the winner of this year is none other than Younes El Aynaoui!

Finals day kicked off to a great start with a Junior Exhibitions match played by some very talented young participants of the Northern Vision Tennis Academy. Ronald Agenor and Younes El Aynaoui then took to the courts playing a very close match to two sets. It was a very even match, but finally El Aynaoui took both sets 6-4, 6-4, in part thanks to his strong serves and long forehand.

This was followed by a very close match between Pat Cash and Bjorn Borg. A proper duel took place on the court with both players fighting their corner. Borg took the first set 6-4 showing the crowd that despite the age difference he maintains the skills he was known for in his hey day. Cash pulled out all the stops in the 2nd set winning 6-4, leading to a nerve racking tie break which was eventually won by Cash 10-8.

The results meant that the crowd was treated to a tie break shoot out to 7 points as the players had managed to rack up two wins & one loss each.

The trophy, which was won by Sergi Bruguera in 2010 was handed to Younes El Aynaoui by none other than our favourite tennis ambassador, Manolo Santana and Jose Luis Hernandez, Tourism Councillor of the Marbella Town Hall.

FOR FURTHER INFORMATION ABOUT THIS YEARS TOURNAMENT PLEASE VISIT MARBELLAMASTERS.ES, OR CALL 663 692 829