The Court Jester comes to Town 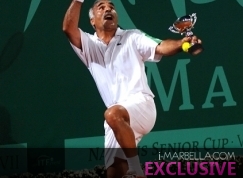 
Marbella Masters Tennis at the Puente Romano Tennis Club is but a few days away.

For those of you who don't know the on (and off) court antics of tennis funny guy Mansour Bahrami then head down to the Puente Romano Tennis Courts this weekend.

As a child Bahrami worked as a ball boy, and unable to afford a racket of his own improvised with frying pans, and broom handles to teach himself the game. His progress was brought to an abrupt halt when the Islamic Revolution led to the banning of professional sport in Iran. He set off for France with his life savings, which he gambled in a casino and lost! Now aged 30 he had missed his chance to make his mark on the professional game but still managed to reach the Finals of the French Open Doubles in 1989. Bahrami reluctantly withdrew from the circuit in the early 90s and when the Champions Tour came into being in 1993, Mansour had found his calling. He now spends over 40 weeks of the year playing in tournaments and exhibitions around the world.

And remember one thing, this man can beat most pros with the edge of his raquet whilst sending a text message with his other hand.