Novak Djokovic Loyal to Marbella, working with Angeles Munoz to get it as Center for Elite National & International Sports @Puente Romano 2020
Tennis 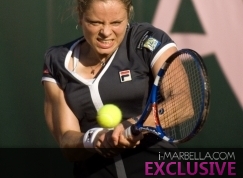 Kim Clijsters arrived in Marbella fresh from her victory in Miami

The second annual Andalucía Tennis Experience takes place on the red clay of Marbella this week, with three of the Sony Ericsson WTA Tour's most established names leading the charge.

Leading that charge is Victoria Azarenka, one of the youngest in the Top 10 and Marbella's No.1 seed this year. Azarenka won her first three titles last year, all on hard; she was the defending champion in Miami last week but saw her defense derailed in the round of 16. The Belarusian looks to find her best form again on the clay, and will open against a yet-to-be-determined qualifier.

Flavia Pennetta, who became Italy's first Top 10 player last year and has been hovering just outside that elite this year, is the No.2 seed. Pennetta has had much more success on clay - six of her eight career titles have come on the surface - but lurking in the bottom half of the draw with her is Kim Clijsters, the No.3 seed and fresh off a scintillating title run in Miami. Clijsters has three clay court titles to her name as well and did win her only prior meeting with Pennetta very handily, losing just one game. Aravane Rezai, who is projected to make her Top 20 debut on this week's rankings, is seeded No.4.

Dangerous floaters include Gisela Dulko, Alexandra Dulgheru and Roberta Vinci, all of whom have won clay court titles. Dulgheru is Clijsters' first test.

One face that will be missing is Serena Williams. She had decided to make a comeback in Marbella, but the persistence of her injury has finally forced her to pull out of the tournament.
“It’s a real pity that we won't be seeing Serena. I know she’s made every effort to be fit enough to make it, but in the end it just wasn’t possible, commented Tournament Director Conchita Martinez in a press statement.

At the inaugural Andalucía Tennis Experience last year, Jelena Jankovic beat Suárez Navarro in three sets in the final. Jankovic is not entered this year.