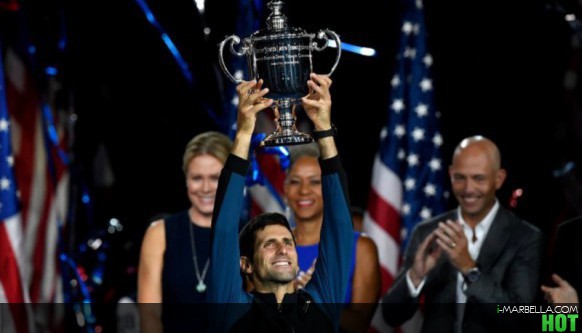 Twelve months ago, Novak Djokovic wasn't even playing in the US Open while trying rehab a nagging elbow injury that eventually required surgery. But now, he's back! and he's the champ!

As for the 2018 US Open Women's Singles Results. Naomi Osaka a Japanese professional tennis player, is the first Japanese player to win a Grand Slam singles tournament in a shocking US Open final, Naomi Osaka Naomi Osaka defeated Serena Williams in Championship 6-2, 6-4.

For now, he has caught Sampras, a big server from California with the fabulous running forehand. Sampras has more in common with Federer stylistically than with Djokovic and his two-handed backhand and ability to turn defense into offense.

“Pete Sampras is one of the biggest legends ever to play the game''.

Djokovic said. “He was my childhood idol. He was someone I was looking up to. The first actual thing I saw related to tennis on the TV was his first or second Wimbledon championship. That inspired me to start playing tennis. There is a lot of significance of me being now shoulder to shoulder in terms of Grand Slam wins with him.”

The hollywood celebrities did not want to miss the men's final of the US Open between the Argentine Juan Martin del Potro and Serbian Novak Djokovic. Stars like Gerard Butler, Kelly Ripa, Ryan Seacrest, Meryl Streep among others were part of the of the final US tennis tournament.

There can be no doubt which man is playing the finest tennis in the world. Novak Djokovic earns 2,000 ATP Rankings points after winning the US Open, reducing Rafael Nadal's ATP Race To London lead to 1,035 points.

“He was back at his best,” said Marian Vajda, Djokovic’s coach, who helped him back to that level after he rejoined his team in April, and helped to retool his serve and restore his confidence

Not so long ago, Novak Djokovic mentioned to the media ''a hike up mountain transformed his season'' After a shock defeat by world number 72 Marco Cecchinato in the French Open quarter-finals in June, Djokovic went trekking on a peak.

"We sat down and we just looked at the world from that perspective," he said. "I breathed in the new inspiration, new motivation. I thought of tennis, thought of the emotion that tennis provokes in me. "It was all positives. I just felt like I had a new breath for this sport." The rest is history.

Djokovic won in Cincinnati in August to become the first player to win all nine Masters 1000 tournaments on the ATP Tour. "If you told me in February this year when I got the surgery that I'll win Wimbledon, US Open, and Cincinnati, it would be hard to believe," Djokovic said. “But at the same time there was always part of me that imagined and believed and hoped that I can get back on the desired level of tennis very soon.”

On the other hand, the Argentinian tennis player stated, “I’m very sad for being a loser today,” del Potro said. “But Novak deserved to take the trophy. He played a great match, a very smart game.

I had my opportunities during the second and third set. But I was playing almost to the limit all the time, looking for winners with my forehand, backhands. And I couldn’t make it because Novak was there every time.”

Djokovic has won five straight matches against del Potro, the last four of those victories coming in straight sets. He is 15-4 against him over all.

Congratulations to Novak Djokovic  for his new US Open trophy!