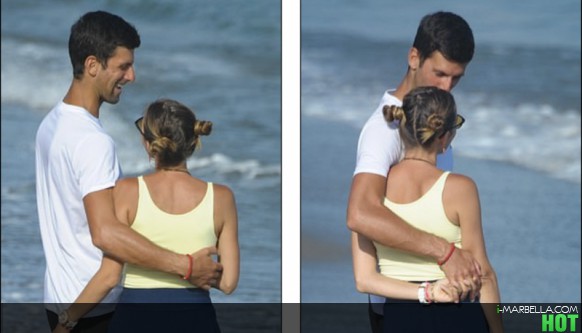 The Serbian tennis player with his wife and family enjoy a relaxing holiday in Marbella 2019 Source: Instagram


The world no.1 decided not to compete in the upcoming Rogers Cup to spend some time resting with his family. After a short vacation in Croatia, Nole decided to go and recharge the batteries in Marbella where he was spotted training with Goran Ivanisevic at the Puente Romano Tennis Club in Marbella to prepare his return to the Cincinnati Masters 1000. August 6, 2019.

Marbella's summer is a catwalk of familiar faces. These days have added two new members to the list of celebrities visiting the Costa del Sol. model Adriana Lima and the tennis no. 1 player Novak Djokovic, who (separately) have enjoyed a few days of rest in the most exclusive places in Marbella.

Novak Djokovic is finally getting the deserved rest after his titanic title in Wimbledon where he won the competition after showing immense mental strength in the final.

The Serb, who is on the Costa del Sol after his victory in the Wimbledon Grand Slam tournament, combines his training on track with other summer activities, such as kayaking, which he enjoyed under the watchful eye of his family.

After the children's first baths, the tennis player and his wife took advantage of a moment of calm to enjoy a pleasant walk on the beach. Walking hand in hand Novak and Jelene showed themselves as a couple in love among the crowd who find the coast of Marbella a place to relax away from the hustle and bustle of world competitions.

The couple looked more than happy as they lapped up the summer sunshine on a Marbella beach today.

The couple looked happy as they played with their two children, Tara, and four-year-old Stefan. Djokovic even enjoyed a venture into the ocean on a kayak, while the tennis ace also did some stretches on the sandy beach.

The champ Djokovic has become a regular visitor in Marbella, where he trains between competitions. For instance, on this occasion, the tennis player came to Marbella accompanied by his wife, Jelena, and their two children. They were also joined by his brother Marko, 27 years old.

Novak has been spotted as well with his brother Marko and his friend (and controversial figure) Pepe Imaz at the Puente Romano Tennis Club to prepare for his return to the Cincinnati Masters 1000.

The current world number one is scheduled to return to compete in the 1000 Masters in Cincinnati after announcing his retirement for the 1000 Masters in Canada that starts next week. Nole' defends the title in that event and will be his last test before landing in New York to dispute the U.S. Open, the last Grand Slam of the season and in which he will also defend his reign.

As throughout the week, Djokovic exercised this past Thursday on the fast courts of the tennis club Puente Romano under the watchful eye of the Croatian extension Goran Ivanisevic, who hired just over a month ago as one of his collaborators. In addition, the Serb used a known 'sparring' to share training.

Nothing more and nothing less than his younger brother, Marko, 27 and current number 573 of the ATP ranking, who usually resides in Marbella. It is one of the Djokovic's favorite spots and one of the places where, as he himself admits, he finds his inner peace. The world leader is preparing on a Spanish base for the North American tour.

Located in the heart of the Golden Mile in Marbella, Puente Romano Tennis Club will be an outstanding experience for tennis fans. Hotel Puente Romano´s Tennis Club in Spain has been established as one of the most important and professional clubs in Southern Europe while being a member of the RFET.