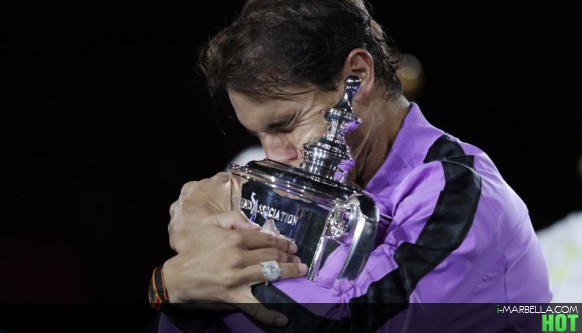 
At the end of the afternoon of September 8, 2019, the Arthur Ashe Stadium of New York, USA, was immersed in a contagious euphoria, in celebration of the conquest of the "Grand Slam" award number 19 that Rafael Nadal takes in victory.

The tennis court of the Arthur Ashe Stadium was the setting for one of the most important events in the world history of tennis while hosting an intense battle of more than 5 hours against the young tennis player Daniil Medvedev, that gave Rafel Nadal the victory of 2019’s US Open.

Nadal Vs Medvedev, The Historic Duel of Tennis  in 2019

Medvedev of 23 years, Nadal of 33 years, offered one of the most exciting games of this prestigious cup.

10 years did not make much difference between energy and experience and throughout these 5 hours, no one could easily assume who would be the winner.

An extremely interesting exchange of techniques and strategies was increasing and decreasing the intensity of the game and kept the fans in total expectation the whole time.

The last score that would give Nadal as a winner was received on the floor. Then, remarkably exhausted, the still champion recognized the talent of his counterpart Daniil Medvedev. “It was not easy to beat him and I wish him a successful career in tennis”.

To this, Medvedev responded with much respect, and in a tone of humor, that had if he had won, the media had nothing to show on the screens about his trajectory in the Grand Slam.

What is to come?

For his part, the Tennis player Medvedev has a prodigious way ahead in the sport, being his last two years, times of significant advances: In 2017 he occupied the place 265 of the world position and on August 19, 2019, he managed to position himself in 5th steep of this scoreboard.

On the other hand, champion Rafael Nadal has a busy schedule for the rest of the year.

The so-called Age of Nadal still isn’t over, but we could expect a lot from Daniil Medvedev in the future as a tennis star.

He is the youngest male tennis-player who achieves the Golden Slam at the age of 24 and probably the most famous player of this sport in the last decade.