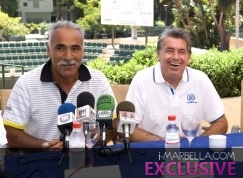 Bahrami and Santana share a joke with the press. Source: johnnygates.com

The Puente Romano Tennis Club in Marbella will play host to the first ever Marbella Masters from 17-19 September. The tournament is expected to attract some 15,000 fans to watch some of the world best tennis legends compete over the four nights.

The tennis club is situated in the heart of the Golden Mile, a residential district between Marbella and Puerto Banus, about a 35-minute drive from Malaga International Airport. Since the clubs inauguration by legendary Swedish tennis player Bjorn Borg in 1979, the Puente Romano Club has hosted some great matches and some of the biggest stars of the tennis world have graced its courts during its 31-year history.