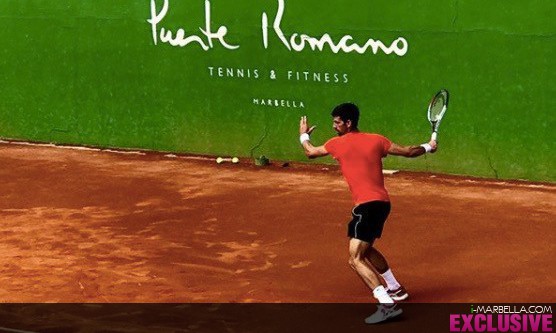 
The Serbian tennis player Novak Djokovic is back in Europe and not directly in Monte Carlo where he resides. On April 7th Djokovic was seen practicing intensely with his brother Marco and his is old former coach Marian Vajda in Marbella almost a year after parting ways.

Djokovic has headed to Marbella, Spain, to start his training sessions on clay courts on Friday night. he is training at the Puente Romano Hotel, which is inside the Pepe Imaz Tennis Academy. Imaz has been a sort of Djokovic's mental coach for years, and he was one of the members of his team who wasn't fired by the 12-time Grand Slam winner.

But while Novak Djokovic was without Marian Vajda on Monday afternoon, he had equally familiar but rather more intimate company in the form of doting wife Jelena.

The Serbian tennis player, 30, shared a kiss with his wife of four-years during an appearance in Marbella, where he is currently training following his reunion with Vajda.

Djokovic prepares in Marbella for the Monte Carlo Masters and the season on clay. The Serbian ended his cooperation with Vajda almost a year ago, after eleven years together and numerous successes.

At this moment there is no concrete cooperation agreement nor has it been about the possible duration of a new relationship, according to the source, which indicates that the role of Vajda is to offer support to Djokovic in the preparations for the season in the beaten earth track.

Marko who is currently ranked 957th and reached a career-high at No. 629 in 2013. No one was next to Djokovic on the court. Djokovic is coachless at the moment. He split with Radek Stepanek and Andre Agassi in the last week.

Novak Djokovic practiced with his brother Marko while Jimmy Widen took his opportunity to take a picture together. As far as we know Novak shared on his website in April, Djokovic announced that he has split from Agassi after less than a year and from Stepanek after less than six months.

In a week he will compete in the Monte Carlo Rolex Masters that starts on April 15. Djokovic is committed to both singles and doubles draws with his compatriot Filip Krajinovic.