Novak Djokovic, he is a hunter and not satisfied with 2nd place! 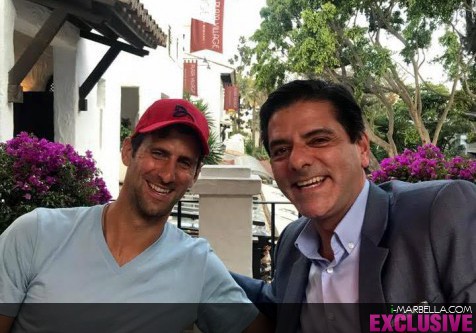 Novak Djokovic and Jorge Manzur in Marbella on 5th of May 2017 Source: i-Marbella.com/ Facebook

Currently, in World No. 2 tennis player in the world, Novak Djokovic is making radical changes and reorganising his team and his life and priorities in the first week of may 2017.

Novak Djokovic 30, he is just not satisfied to be second Tennis Player in the world, he just wants to be first!

Novak comments about this is:

" I am a hunter, and my biggest desire is to find the winning spark on the court again.”
“I require to continue raising the level of my game and endurance, and this is a continuous process. I appreciate my journey; it feels like I am starting something new again and I love this challenge."

Mr Jorge Manzur General Director of Puente Romano Beach Resort and Spa had a chance of catching up with Novak Djokovic while he was enjoying breakfast in Plaza Village on 5.05.2017

Mr Jorge Manzur General Director of Puente Romano Beach Resort and Spa had a chance of catching up with Novak Djokovic while he was enjoying breakfast in Plaza Village.
Mr Manzur is always saying so much nice things about Novak Djokovic, the great professional, the better human being.
Mr Manzur said on his Facebook: "A pleasure to be with you!"

Novak Djokovic has Monte Carlo residency. Serbian player does not spend time there too much. First of all, he competes on the ATP Tour, and secondary he also has a home in Marbella, Spain, where he was training here also last week. Novak Djokovic trains in Marbella during the year quite often, and every time also he is training in Marbella in Puente Romano Tennis Club with his Brother Marko Djokovic and his ‘spiritual teacher,’ Pepe Imaz.

Novack Djokovic decides to keeps around his ‘spiritual teacher,’ controversial love guru and former Spanish professional tennis player Pepe Imaz. He has taught Djokovic philosophy ‘Peace and Love’ and practices it every day (Amor y Paz) as central to his coaching.

Novak was training in Marbella in May 2017 before Madrid Open.He was in Marbella 1 week before (1.05-07.05) on 2017 were training with his Brother Marko Djokovic, supported by his wife, Jelena and his ‘spiritual teacher,’ Pepe Imaz.

Novak Djokovic will certainly do the best to defend his Champion title from 2016 Mutua Madrid Open after beating Andy Murray in the finals. This year 2017 Mutua Madrid Open takes place now from 4 until 14 of May.

Speaking at the Madrid Open on Sunday afternoon, Djokovic opened about splitting from his coaching staff and said the decision to do so was "mutual" from both sides.

Novak Djokovic's split from his coaching staff last week signalled the biggest upheaval in his training since he and Boris Becker went their separate ways last December. Novak Djokovic has apparently asked Boris Becker to stay on as coach. Becker responded by telling Djokovic it’s either him and Marian Vajda or his new guru Pepe Imaz.

The Serb is seeking a fresh start in his tennis career after ceding the world number one spot to Britain's Andy Murray last year.

"It was not only my decision, and it was not an easy decision, but all of us sensed that we should change. I am very grateful and proud of our relationship and unbreakable bond that we built through years of mutual love, respect, support and understanding. They are my family, and this will never change.”

Djokovic ruled the men's single game in the first half of the last year 2016, apparently his rank as the best player in the world. However, victory at last year's French Open proved to be a final high point of the season, but Novak was starting losing in games and his self-confident drop down to dramatically that he lost his World No. 1 Tennis Player title to Andy Murray in November 2016.

The 12-time Grand Slam winner prepares for the defence of his French Open title next month, Djokovic said it was important to have things settled before taking to the court in Spain.

"I just focused on every day that happens. I spent a magnificent eight, nine days training together with my brother, my physiotherapist that has been working with me since last October.

"I am not completely by myself. I have a grand support of the family and administration and my current company."

Of his game so far this year, the 29-year-old says he took defeats into account when considering such drastic actions.

Defeat to Denis Istomin at the Australian Open in January was followed by defeats against Nick Kyrgios in Mexico and at the Indian Wells Masters in the US.

"When you start losing more matches, you start questioning your game, yourself, what you are doing wrong so you can rectify that and get better, turn the tables around.

"I am studying about that. I am analysing my tournament. I am deciding to get as much as I solely individually can do, and also include the people that are close to me.

"I have been very fortunate to experience the upwards direction of my career ever since I have started. Now it is a different direction a little bit."

Despite the fantastic cooperation in recent years, currently, the changes are necessary, a new approach and new energy to Djokovic that can raise his game and perform better on the ATP tour.

However, in the immediate future, Djokovic has confirmed that he will tour without a coach:

" I have been on tour long enough to know how to manage daily routines, and I do not want to rush my decision. I will be on tour alone for a while with a support of my family and administration. I will tell the public when I find the right person, but since then, I thank you for your support and understanding."

The latest info is that Novak is planning to hire Andre Agassi.

Novak Djokovic and his wife Jelena are expecting a second baby late this summer.