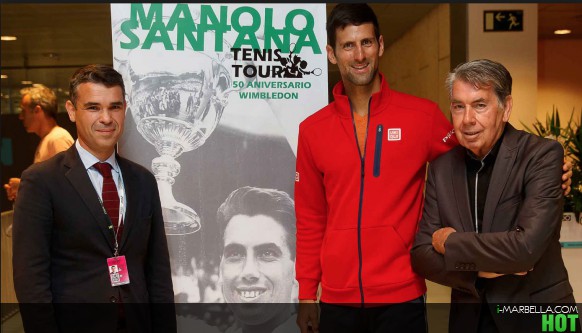 
It's been 50 years since one of the greatest feats in the history of Spanish sports.

Manuel Martínez Santana, also known as Manolo Santana (born 10 May 1938), is a former amateur tennis champion from Spain who was ranked World No. 1 in 1966. He was born in Madrid.

In 1965, Santana led Spain to unexpected victory over the US in the Davis Cup , and he became a national hero. Despite his previous Grand Slam successes in the French Championships (1961, 1964) and the U.S. Championships (1965), Santana's win at the 1966 Wimbeldon lawn tennis championships was a surprise, where he defeated the sixth seed Dennis Ralston 6–4, 11–9, 6–4. This was his last Grand slam title. His last big tournament win was in 1970 by winning Barcelona where he defeated Rod Laver 6–4 6–3 6–4. He also captured the doubles title in Barcelona that year when he teamed with Lew Hoad to defeat Laver/Andrés Gimeno 6–4 9–7 7–5. He was named to the Hall of Fame in 1984.

At the 1968 Olympic Games in Mexico City, Santana won the Gold medal in Singles, though tennis was only a demonstration sport at that time. It became a medal sport in 1988 (after another demonstration event in 1984).

He appeared at the 2011 Wimbeldon Championships in London, England in the Royal Box to watch the Men's Final which was between his fellow countryman Rafael Nadal and Novak Djokovic (who had just become World No. 1 after winning his semi-final match against Jo-Wilfried Tsonga).

Half a century has passed since the "pioneer" victory at Wimbledon. Manolo Santana, dressed in white, defeated Denis Ralston at the All England Club central court. As he raised the winner's trophy, he became the first Spaniard to win on London grass and to have one on all court surfaces. He fondly recalls how he broke protocol and kissed the duchess of Kent's hand just before raising the cup with the shield of Madrid, another of his great passions, to his chest. The legend emerged, a legend who now lives in Marbella and resists retirement. "I've got at least 20 years left," the Madrid Spaniard said.

Santana was born on August 10, 1938 to a poor family in Madrid. He began making a living working at a tennis club where "the one with the best court made the most tips." He always set aside a few pesos of his earnings to play foosball and the rest was given to his mother. "I made my own first racket from the back of a chair," recalls Santana, who is meeting with us at his own tennis club which he started over 20 years ago in Marbella, where he lives with his wife Claudia Rodríguez, and their five adopted dogs and five adopted cats. It's a city that has founded a place in which children can dream of becomming the next Rafa Nadal, whom Santana himself strongly admires.

Santana doesn't have any routines because he doesn't like them. "The only thing I always do is exercise for an hour with a monitor and play 40 minutes of tennis. Two baskets of balls, coming at me from all sides, and I just hit." His life is dedicated to being a guiding figure for young athletes. His work starts with a school at the club with 150 children.

He is a patron of young athletes and is always attentive to the school's training. "What I do, because I like it, is to go and watch them hit." When they're not training, they usually approach Santana and often play games together. The children greet him warmly. "It's very gratifying to see their results." Improvements in their game must be made on all surfaces because, according to Santana, "a champion should win on all courts."

If any of the kids stand out, he gets them places at some of the country's best tennis schools. "Like the one Rafa Nada opened in Manacor," he says. "Although most probably go to Madrid or Barcelona," he explains. "We have 17 or 18-year-old kids who aren't going to become professionals, and so we give them special training to help them reach an acceptable level. If they play well and know English, then they can go to the United States and we set them up with an athletic scholarship so they can go and study there," Santana explains.

He arrived in Marbella an exhibition tournament with other major world sports figures in 1979 when he was almost retired. "I made a mistake because I could have asked for a lot more money," he regrets, smiling. That championship marked the beginning of a friendship with Björn Borg that would unite him with the city forever. He played a match against the Swede, world champion at the time, in the Marbella bullring. That was Santana's condition to participate: "With the crowd constantly cheering me on, until I hit a ball that bounced in his court and came back to mine. I ran from the baseline and struck the net. The crowd laughed, the Swede looked at me with his deep eyes, and I didn't win another game. We went from three even games to 6-3, 6-0. The crowd shouted 'Manolo! Manolo!' but Manolo was over," he explains between laughter.

That match forged a good friendship with Borg, who in 1983 offered to take over the Puente Romano tennis at Wimbledon, which Borg managed. After another match between the two, "without giving up," he took over the luxury hotel's club for 16 years. From there he went on to found his own club, which he juggles with other jobs that make him live, at his "77 big ones," between Madrid and Marbella. "Whenver I arrive at the María Zambrano station they must think, 'Here comes Santana again!'"

He's the director of the Madrid Mutua Open. "I love to get things ready for the Master and go see the sponsors. We're always innovating, because a 21-million Euro tournament should be a championship that thanks the players and the city of Madrid," he says. It's a job that goes on top of his involvement with the U-16 Davis Cup. "I don't settle for sitting in front of the TV." That's why he travels to all of the big tournaments, where he's in contact with all of the world's best tennis players. "I'm envious I can't play," he admits.

He feels very welcome in London and New York, where only Spaniard Rafael Nadal has won since Santana's victory in the 60's. Regarding the Spanish tennis player, Santana states that "he's so good that sooner or later he'll have another chance... We invited him to the Madrid Master to participate for the first time. After losing, he told me he'd win the next year, and he did," Santana recalls. His travels allow him to meet all of the world's best tennis players and spoil them as if he were the grandfather of the sport. He has a good relationship with almost everyone, which helps him to organize ATP projects. "Rafa is a humble guy who never leaves the court when he loses," he emphasizes, an admiration that he shares for Novak Djokovic. "He's a great guy. As humble as Rafa," he notes, although his favorite tennis is Roger Federer's "Because of his elegance."