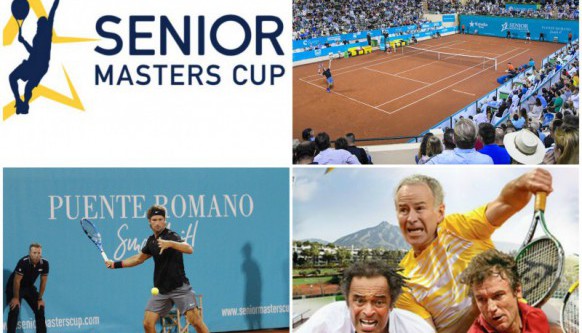 
The high-level Senior Masters Cup returns to Marbella in September with its third edition bringing back as it did in past years, great figures of the history of international tennis to our beautiful city. The date of the tournament has been confirmed to be September 28 and 29 of 2018 at the Puente Romano Tennis Club in Marbella, Costa del Sol, Spain.

For the third year in a row, consolidated stars of the racket will meet in the capital of the Costa del Sol to compete in the Senior Masters Cup, a sport and social tournament of reference in the calendar of Marbella.

This year, the organization is committed to a renewed format in which the clashes at the Manolo Santana central court are reduced to two days, instead of the usual three-day competition.

The change in the calendar aimed at strengthening the most social and relaxed aspect of this event after each group of matches.

Carlos Moya at the 2017 edition of the Senior Masters Cup

On Thursday 27 a pre-event will take place where children from the municipal academies can meet and accompany the legendary figures of tennis, and, in the afternoon, the official dinner of players is scheduled, in which most international tennis stars and the VIP of Marbella and the society of Malaga are expected.

The full set of players who will be able to participate in the Senior Masters Cup trophy has yet to be announced, although there is no doubt that the tournament will offer another year the opportunity to see rackets with a long professional career in Marbella.

The Senior Masters Cup has been consolidated as an outstanding event of the month of September in the social and sporting calendar of Marbella. This tournament supported by its figures with more than 6,500 spectators in the last edition, more than 93 million impacts in the media and more than 700,000 impressions in Social Networks.

Senior Masters Cup is promoted by the international firm Tennium, a company based in Barcelona linked to the world of tennis, which also promotes other international competitions like the European and Argentina Open.