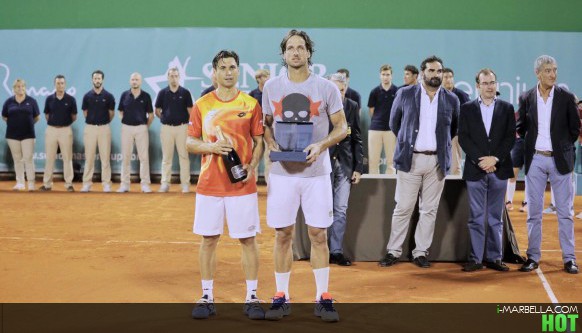 
David Ferrer, Feliciano Lopez, Tommy Haas, and Tommy Robredo meet in the capital of Costa del Sol, Spain during September 27 and 28, 2019 to compete for the 4th edition of the Marbella Senior Masters Cup 2019, a top-level tennis tournament that took place at Puente Romano Tennis Club in Marbella with Feliciano rising as champion.

With this victory, Feliciano joins the history of the Senior Masters Cup Marbella, behind the previous winners Juan Carlos Ferrero (2018), Carlos Moya (2017) and Albert Costa (2016).

As if it were the final of a Grand Slam

The duel Feliciano vs Ferrer has recalled in Marbella the best years of the two athletes.

Both players showed incredible performance and energy, from the first moment, Feliciano showed his good form despite a slow start, handling the first set with an overwhelming closing of 6-2.

Thus, after an initial advantage that did not hold in the second set, and after a long duel. The tennis pro from Toledo closes with a brand new 6-2, 5-7.

"It has been a tough match, David is very fit. It has cost me to enter the match and then it was a super tie, it was more than anything a lottery because victory could have fallen anywhere," said Feliciano after his victory.

For his part, David Ferrer who officially announced your retirement last May 8 at the Mutua Madrid Open, but gave quite a fight in the final of the Senior Masters staying with the second set in hand.

"I have enjoyed it very much, as in the old days (...) I have made good tennis, and above all, I could coincide with 'Feli', Robredo and Haas, which is a pleasure" added Ferrer who also commented that he hoped to see Feliciano Lopez for more years in professional tennis to continue competing.

In this way, Feliciano Lopez is framed behind Juan Carlos Ferrero as the champion of this relentless tournament of the Marbella schedule.

On the other hand, in the match for third place, Tommy Robredo stood against the German Tommy Haas with a firm 6-4, 6-4.

This fourth edition of the Marbella Senior Masters Cup 2019 was a showcase of pure talent, with the participation of David Ferrer,  Feliciano Lopez, Tommy Haas, Tommy Robredo who disputed 4 impeccable matches.

About The Senior Masters Cup

The Senior Masters Cup is an event from Tennium and, for the past four years, under the production of Elisabeth Op de Beeck.

This Marbella tennis club is the official headquarters of renowned tennis tournaments held in Spain, such as the ATP, WTA, and world-famous Davies Cup. Among its facilities, it includes a gym, activity room, massage room, sauna, and Turkish bath.