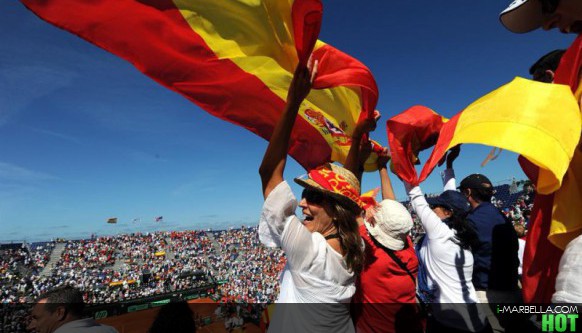 Marbella will host the first round of the Davis Cup 2018 Source: Copa Davis Official Site


The Spanish Tennis Federation designated the city of Marbella as host of the first round of the Davis Cup 2018, which will take place between February 2 and 4, with Great Britain as the single rival.

The city of Marbella has finally been designated over Granada to host this event and the matches are to be played on Puente Romano’s Central track which will require extended stands.

The designation became official on the evening of November 15th of 2017 during the meeting held in Zaragoza by the board of directors of the Spanish Tennis Federation.

As usual, the hosting players had the final word about the place to host the games and Spanish tennis players prefer to play at sea level, where the ball goes slower.

This way, the city of Marbella and Puente Romano will be for the third time host for a Davis Cup eliminating round, as it went against Mexico in 1989 and later Germany, in 2009.

At this moment, the track has the capacity for 2,500 people and will have to be expanded to operate with 9,000 spectators.

Additionally, this round will be the premiere of the new captain of the Spanish team, Sergi Bruguera, who knows this track very well from his participation in the Marbella Masters 2010.

To run with the expenses, The Mayor announced that Marbella City hall will count with the institutional support of the Andalucía Board, Provincial Council and Commonwealth of Municipalities. She announced that there is a budget set for this expense on 2018 but didn’t give out details on the exact amounts.

The Federation guarantees a return of 50% of the money collected from the sale of tickets and season tickets for the three days of competition.

We are looking forward to the arrival of this incredible event in the city of Marbella and we invite you to follow us to keep abreast of the progress of this great news of the world of tennis.

This Marbella tennis club is the official headquarters of renowned tennis tournaments held in Spain, such as the ATP, WTA and world-famous Davies Cup. Among its facilities, it includes a gym, activity room, massage room, sauna and Turkish bath.