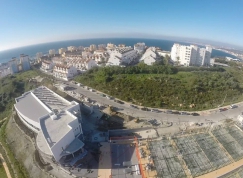 It has beeb more than seven years since construction began for the Las Mesas sports centre in Estepona.

Now it has been announced that it will finally be opening to the public this May 2014. Work on the centre was on hold for five years because the company who was in charge went bankrupt. But after an investment of €3.6 million from the town hall, the project recommenced.

The sports centre, that is located near Parque de los Ninos, will feature ten tennis courts, an artificial grass pitch and a large gym. Registration is already open and costs €40 for an individual or €70 for a family.