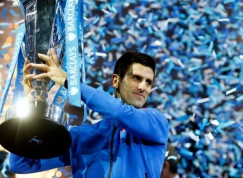 
Novak Djokovic rounded out one of the most dominant seasons in the history of tennis by winning the ATP World Tour Finals in London Sunday with a straight sets dismissal of Roger Federer.

The three-time defending champion beat his long-time rival 6-3 6-4 in a one-sided title match at the O2 Arena which lasted just 81 minutes.

Hopes had been high that Swiss maestro Federer could land his seventh title at the prestigious end of season showpiece after beating Djokovic in straight sets in group section play last Tuesday.

He will now take a break before beginning preparations for a crack at his 11th grand slam title as he defends his Australian Open crown in January.

Novak Djokovic (born 22 May 1987) is a Serbian professional tennis player who is currently ranked world No. 1 by the Association of Tennis Professionals (ATP). He is considered to be one of the greatest tennis players of all time.

Djokovic has won eight Grand Slam singles titles and has held the No. 1 spot in the ATP rankings for a total of 150 weeks.

Novak visited Marbella in June 2015, when he partied at Suite Marbella at Puente Romano Beach Resort.