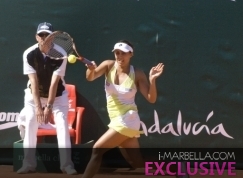 
Andalucía will again be present all over the globe with the transmission of the second edition of the Andalucía Tennis Experience, organised by the Consejería de Turismo, Comercio y Deporte at the Club Puente Romano in Marbella (Malaga) between 3rd and 11th April.

The broadcasting of the tournament, organised by the Consejería de Turismo, Comercio y Deporte at the Club Puente Romano in Marbella between 3rd and 11th April, is generating considerable media interest. And can be heard localy on Spectrum FM The Andalucía Tennis Experience will bring some of the top women’s tennis players to Andalucía and give the chance to put the region in the forefront of media coverage on all the main TV channels. Audience figures for the first edition of the tournament confirm this and it looks as if the second edition will be similar or even slightly above last year’s. More than 16.000.000 viewers saw the tournament last year, either live, in highlight programmes or as part of news broadcasts, via 300 hours of broadcasting. With broadcasts last year in Portuguese, Albanian, Rumanian, Russian, French, English, Spanish Arabic and Serbian, the tournament organisers are confident of increasing these figures, this time around The tournament was also widely featured in other countries, especially USA, home to the event’s top player Serena Williams, with 20 hours of broadcasts, 4 of those live, as well as regular coverage on CNN and ESPN. Total US audience figures, despite Williams’ early departure, were over half a million.

Another country which registered a high audience was Brazil, with 14 hours of transmission, 6 of those live and a total of 100.000 viewers, whilst in Italy 34 hours of coverage were watched by 300.000 viewers.

The first edition of the Andalucía Tennis Experience was also shown in various Middle East countries, France, South Africa, Russia, Poland, Serbia, Montenegro, Bosnia, Albania and Romania, as well as in a number of Asian countries via Star Sports Asia.