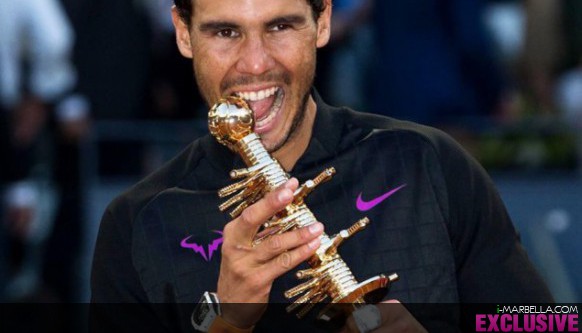 The match had a fantastic first set, Nadal broke for the 2-0 lead in the second set and never looked back. With his titles won in Monte Carlo and Barcelona, Nadal cemented himself as the clear favourite for Roland Garros that takes place in Paris, France, by the end of May 2017.

Rafael "Rafa" Nadal Parera ( born 3 June 1986)  is a Spanish professional tennis player. He is widely regarded as the greatest clay-court player in history, and owing to his dominance and success on the surface, he has been titled "The King of Clay"

Nadal cemented himself as the clear favourite for Roland Garros that takes place in Paris, France, by the end of May 2017.

"To play in Madrid Open and win here means a lot to me,” said Nadal afterwards. “I am always very nervous and emotional to play a final in Madrid.”

We can only imagine how the former No. 1 tennis player Novak Djokovic must be feeling now, given that he was preparing for the Mutua Madrid Open in Puente Romano - READ MORE.

Currently, in World No. 2 tennis player in the world, Novak Djokovic is making radical changes and reorganising his team and his life and priorities in the first week of may 2017.

The incredible match won by Rafael Nadal and Novak Djokovic was watched by the Spanish Tennis legend Manolo Santana and a football legend Cristiano Ronaldo at Madrid.