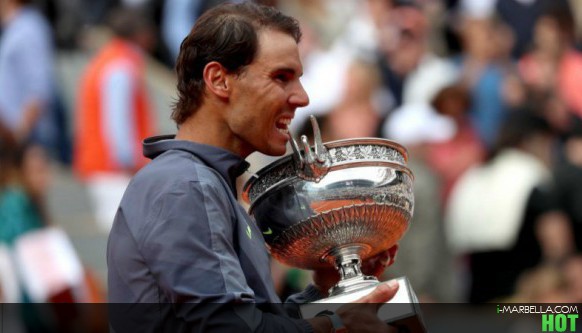 With an overwhelming victory, Rafa Nadal takes the first place at Rolan Garros 2019 and leads the ATP once again, Spain, 2019 Source: i-Marbella.com


The so-called "Age of Nadal" of the tennis keeps rolling as the Spanish Tennis player gets another tournament in his hands by taking the Roland Garros 2019 in Paris from the hands of Thiem with an impacting 6-3: 5-7: 6-1: 6-1 game

It is impossible to know how tennis fans of the next generations will explain what we see today as "Age of Nadal".

The Spanish man Dominates all facets of the game, is remade and reinvents himself and, especially on clay, somehow manages to grow with each passing year.

In this Roland Garros, Nadal was faced in a final nothing closed against Thiem, where he has even given the feeling of not having had to never reach the maximum.

The Austrian, a high-level player, has come out of the door with a 6-1 and 6-1 in the final two sets.

From the first set, Dominic Thiem has given a great exhibition of quality both in the blows as in tactics and strategy.

However, despite having played an excellent game and demonstrated its notorious growth with respect to previous tournaments, Thiem was no match for Nadal who closed with a fast and consistent onslaught a brutal victory.

In the meantime, Rafa Nadal shares his victory with his fans on his social media showing off a slice of his celebration at the Intercontinental Paris with a tennis decorated cake and the sighs of his newly obtained trophy.

Rafael Nadal had yet another fantastic fortnight at Roland Garros, emerging with the 18th Grand Slam title of his career. Here are 18 different things the King of Clay achieved in Paris:

An achievement that turns him into the first player in tennis history, male or female, to win the same major 12 times.

Besides, the only other player who has even hit double digits was Margaret Court who won 11 Australian Opens.

On his part, Manolo Santana -Former ATP champion and Spain's most historical tennis player- and Claudia Rodriguez were present at the tournament from beginning to end in support of the everlasting star and were the first ones to congratulate him for this new achievement.

Will the Age of Nadal continue? Keep updated here and get the results of the Wimbledon tournament in which Nadal will start participating in the next three weeks.