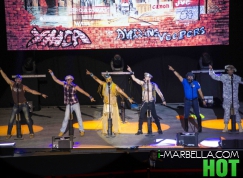 
This time, Starlite 2015 saw the amazing performance of the legendary Village People!

Village People is an American disco group well-known for their on-stage costumes depicting American masculine cultural stereotypes as well as their catchy tunes and suggestive lyrics.

The group scored a number of disco and dance hits, including Macho Man, Go West, the classic club medley of San Francisco (You've Got Me)/In Hollywood, In the Navy, and their greatest hit, Y.M.C.A.. They have sold more than 100 million records worldwide.