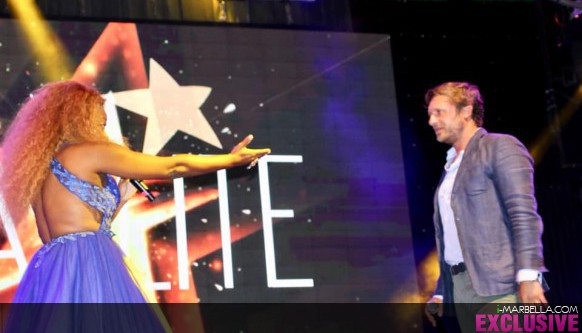 
The cuban star Yanela Brooks has again revolutioned the stage, this time with her dazzling concert performing his latest release 'Top of Cuba' at Startlite Festival where she shared the show with Juan Peña, one of the greatest exponents of Spanish flamenco music on August 23, 2019.

Starlite is filled with magical moments every night. The last one was no exception. More than three and a half hours of live music performed by Yanela Brooks and a trio of flamenco aces and Spanish songs.

The Starlite attendants enjoyed of a unique performance that was brought out by the extraornidary singer and performer Yanela Brooks. wearing a stuning blue dress designed by @vertizegala.

The cuban singer shared the stage with Juan Peña, one of the greatest exponents of Spanish music, specificly famenco, who returned to the Starlite after his stellar performance last August 10 with Andrés Martín.

Juan Peña took to the stage to perform great songs to all that encouraged their spectators to dance. In a gesture of generosity, Juan Peña shared the stage with the singer Juan San Juan, who offered his most personal version of the song 'Vida Loca', by Pancho Céspedes.

Yanela Brooks though performed with Peña an intense and vibrant song that bristled the skin of those gathered in Starlite to enjoy the night.

At backstage, Yanela offered her album #topofcuba to Sandra Garciasan Juan, the organizer together with @antoniobanderas of Starlite Festival, the most important music festival of Spain recalling ''an inspiring woman, fighter who believed in Her Dream, her love for art and music led her to get to work with the biggest Stars in the world and bring them to #Starlite every year''.

Sandra García San Juan also indicated that she was also a big fan of the new album #topofcuba.

Yanela Brooks took this chance to delight her fans with her latest hit. Top of Cuba, an album that is known for bringing together the Cuban most popular music compiling recognized Cuban musicians such as Adalberto Alvárez y su Son, José Luis Cortés, Formell y the Van Van to mention a few.

Brooks has for several years had the idea of creating a project that would bring together the best orchestras in Cuba, which was difficult to do because of the difficulty of bringing them all together. Today "Tops of Cuba" is a dream come true, an album that will be released soon, will travel the world and will compete for a Grammy Award.

About Yanela Brooks
Yanela began her piano career at the "Conservatorio de Música de Samuel Manuel" when she was only 7 years old and continued to receive her classical training at the best music academies in Cuba. From a very young age, she created the group 'Yanela y las chicas del Sabor', which defended Cuban sonorous traditions. She was the director and pianist. ''I always had an interest in jazz instilled in me by the maestro Jose Luis Cortés and I tried to insert it in all the songs".

For several years Yanela had the idea of making a project that would bring together the best orchestras in Cuba, which was difficult to do because of the difficulty of bringing them all together. Today "Tops of Cuba" is a dream come true, an album that will come out soon, travel the world and compete for a Grammy Award.

Starlite is the best boutique festival in Europe. After seven editions, Starlite has become the longest festival with more than 46 days of concerts. Music, culture and gastronomy gather in a single place. It’s a unique event for those who want to enjoy close and intimate concerts in an incomparable venue.