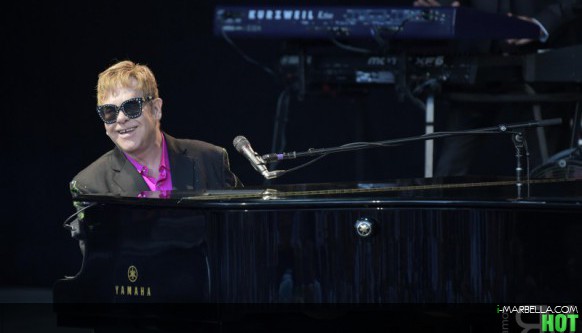 
Elton John did not disappoint, as expected, on his first visit to Starlite, where he hung up the sold out sign. A crowded auditorium clothed the living legend of music and enjoyed the magic of the artist on the eighth day of the Festival. The British delighted the audience with his latest album "Wonderful Crazy Night", the 33rd of his career, and performed the most mythical songs of his discography as "Candle in the wind".

Starlite's audience welcomed Sir Elton John with enthusiasm. As soon as he stepped on the stage, a loud ovation accompanied him until he sat down at his piano and started the first chords of "The bitch is back." Then came songs like "Bennie and the Jets" and "I guess that's why they call it blues", among others.

Sir Elton John playing at the Starlite Marbella on July 2017

Elton John, he showed why he is one of the best-selling soloists in the world (250 million records endorse him), continued to interact with his devoted audience, he gave winks of complicity encouraging the audience to dance and chant his songs, such as "Rocket Man" and "Your song".

The British artist had reserved his rockiest side by the end of the show, with performances of timeless hits like "I'm Still Standing", "Crocodile Rock", "Your sister can not twist (but she can rock 'n roll ) Or "Saturday night's alright for fighting".

Elton John wanted to honor his friend George Michael, recently deceased, in Starlite with the song "Do not let the sun go down on me", which excited the whole audience.

Starlite is music, show, experience, and sensations; is a meeting of national and international artists; Is a meeting point for friends and people from the world of culture, leisure, sports, celebrities and opinion leaders; It is pure nature, it is philanthropy; But above all it's exclusivity and entertainment, it's high gastronomy and premieres, it's luxury and closeness ... Starlite is much more than a festival, and this 2017 presents a sixth edition in Marbella very special, and a 2nd Edition of the Gala of Mexico for everything top.