Rosario and Rosana at Starlite Festival - 2018 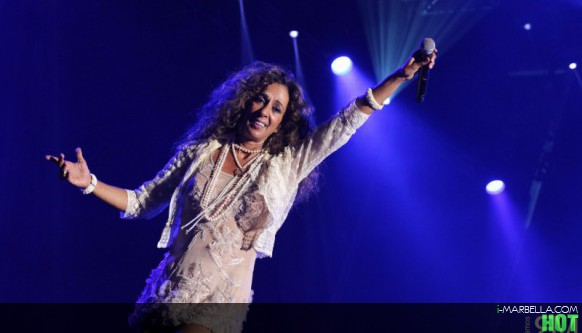 Rosario Flores on the stage of Starlite Source: ramoscomunicaciones.com


On July 13th, 2018 Rosana and Rosario dazzled their public on the stage at Starlite Marbella. For the Canarian artist, it was her first time on this stage and greatly she felt like home, for Rosario, is the third time on stage, and she really enjoyed her audience and the love of her fans.

The seventh edition of Starlite Marbella once again enjoyed a night of success with the help of two Spanish artists, Rosana and Rosario, who delighted the audience that came to the Starlite auditorium and enjoyed the concerts of the Canarian essence of Rosana, and the flamenco magic of Rosario.

Moments before going on stage, Rosana, original from Lanzarote, said: "It's my first time here and I'm fighting because it's not the only one or the last"

"The quarry is special for everything: space, sound, time, respect ... There are many things in favor that make one want to share a night of magic and music with people here" said Rosana, who was in charge of breaking the fire on stage with a well-known theme such as Sin Miedo.

The Canarian prepared all the ingredients, combined them and presented them before a packed audience of Starlite in an irresistible cocktail with which she hit “la vuelta al mundo otra vez”, as the lyrics of Con el viento en mi favor ... But the artist also had moments of symbiosis with her fans, who could not contain the excitement when Rosana sang songs like Si tú no estas, El talismán, and A fuego lento, which are now part of the DNA of the musical history of the last century, and that sang accompanied by La Voz Kids girl, Rocío.

The presenter Toñi Moreno didn't want to stop immortalizing some moments of the concert.

THE FLAMENCO MAGAZINE OF ROSARIO

For her part, Rosario was the protagonist of the second part of the night. The little one of the Flowers started "looking for medicine" for her pain with Mi Piel, to continue with Como me la maravillaría yo and with the felt Yo me niego.

Rosario Flores spreads art on the stage of Starlite

The flamenco magic of Rosario went to the sky of Starlite when she dedicated the song to him To the son of the Tambora his father, Antonio González, El Pescailla; followed by Qué bonito, the first song that she wrote in solitude: "I believe in angels and magic," confessed an excited artist.

"Let's go with strength," shouted a delivered Rosary to the audience, at the same time he sang "Marcha" and "No dudaria", the subject with which he closed his concert, which was his third visit to Starlite.

The singer Rosana, with one of her electric guitars on the stage of Starlite