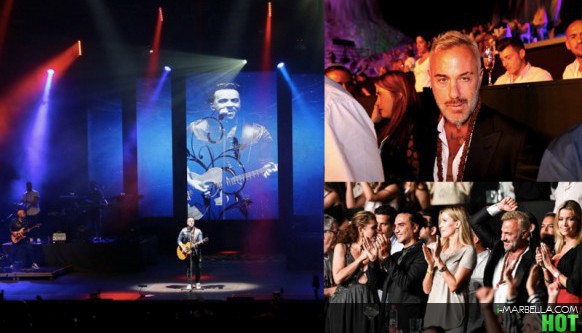 
The Latin star Luis Fonsi returned to Starlite Festival with all its Caribbean rhythms and its best songs. Fonsi performed a dazzling show at Auditorio de Marbella on July 26, 2018, where he mixed up romanticism and danceable tunes such as Despacito, Échame la culpa, and Calypso.

Puerto Rican singer-songwriter Luis Fonsi has made his return for the second consecutive year to Starlite Festival to delight his followers in Spain. The party started with Fonsi performing ''Tanto para nada'', ''Corazón En La Maleta'' top hits that were way before Despacito.

Personalities from everywhere did not want to miss the Latin party since Fonsi’s concert was the place where they met to enjoy a fluvial party.

"I'm really happy to be here again, and I hope to repeat always. This is a beautiful Festival that brings together great talents both Spanish and international in a city like Marbella, which gives off a lot of energy, " were words from Fonsi, moments before performing:" What better place to celebrate life than in this environment ", he added in allusion to the enclave of the quarry.

It's now been just over a year since "Despacito" arrived on YouTube, Luis Fonsi success hasn't only remained unchanged but has been growing constantly. Luis Fonsi show's on Starlite was a combination of great ballads like ''Llegaste tú'', dedicated to his daughter Micaela, or ''Quien te dijo eso'', songs full of Latin rhythms, as ''Yo te propongo'', Despacito and his new success, Calypso.

For the second year in a row, Luis Fonsi has released a summer song and it’s taking the internet by storm. “Calypso” pays homage to another side of Caribbean culture, its African heritage. Fonsi and Steflon (who is of Jamaican descent) take it back to Puerto Rico, this time serving steel drums and reppin’ for Afro-Latinos

Fonsi surprised his show with the presence of the singer Antonio José on stage, with whom he sang ''Aquí Estoy Yo''. With almost 20 years of career and many tables on stage, Fonsi knew how to engage the public of Starlite.

The finale to a magical night in Starlite was put by Fonsi with a new interpretation of his Despacito hit, in which he said goodbye to a crowded auditorium, that next day received the performance of Miguel Poveda.

Apart from Luis Fonsi, Gianluca Vacchi together with his looks and his passion for music did not leave anyone indifferent while they danced the best hits of the moment, among which was Love, who plays with Sebastián Yatra.

Gianluca Vacchi (Born on August 5, 1967, in Bologna, Italy). is an entrepreneur and financier and serves as a President at SEA Societe Europea Autocaravan S.p.A. He graduated in Business and Economics from the Alma Mater Studiorum University in Bologna and participates in the management of a number of investment companies. He got famous thanks to his tattoos, dance moves and controversy in Instagram. Recently, he also became a DJ.

Yanela Brooks didn't miss a chance to tell her fans about Fonsi's moment at Starlite. Posting on Instagram a photo together with Luis Fonsi,  expressing no more than gratitude with the Puerto Rican for having her in the concert ''Getting back to Marbella and meet my dear @luisfonsi what a laugh !! how I enjoyed your concert at @starlitefestival''. Same flow and heart. Thank you for staying the same even though you're number one of the WORLD in Latin music! Such a long path of the 3 BILLION downloads with #despacito, you are the best!''.

Luis Fonsi will be awarded at the VII Global Gift Gala @Marbella July 29, 2018