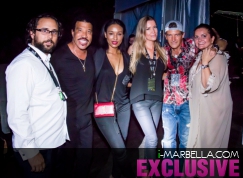 Starlite is always full of star-studded performances, and this year's event is no exception. Meet Lionel Richie at Starlite 2015!

Lionel Brockman Richie, Jr. (born June 20, 1949) is an American singer, songwriter, musician, record producer, and actor. Beginning in 1968, he was a member of the musical group Commodores signed to Motown Records. Richie made his solo debut in 1982 with the album Lionel Richie and the number-one hit Truly. He has sold more than 100 million records worldwide, making him one of the world's best-selling artists of all time.

Antonio Banderas and Nicole Kimpel celebrated her Birthday at Starlite

Starlite 2015 welcomed Lionel Richie, who arrived at the festival with his All The Hits All Night Long tour. The American pop artist gave the very best of himself, in which a magical performance in a unique place and under the stars is meant -- the Starlite's quarry. The fans truyl enjoyed the music icon's performance.

Lionel Richie has received some of the most important awards, such as an Oscar, a Golden Globe, 5 Grammys, 16 American Music Awards, and has sold 100 million albums worldwide.