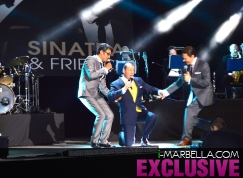 For a few hours, Starlite seemed to time-travel to the 1950s and 1960s, the golden age of music, and the Rat Pack's tribute to Frank Sinatra, Sammy Davis, and Dean Martin (played by Stephen Triffit, George Daniel Long, and Marc Adams respectively) was breathtaking.

The Rat Pack offered the audience much more than a mere concert -- a complete show with songs and jokes, invitations to lift glasses and toasts, walks through the audience, and even a bonus track dedicated to a guest's birthday.

The show, divided into two acts and featuring an orchestra of nine instruments, consisted of a famous repertoire including Sinatra's Fly Me to the Moon, Everybody Loves Somebody, Chicago, My Way, and New York that closed the show with a standing ovation from the audience.

"This place is absolutely magical! (...) " said the three performers at the end of the show.